Shall I stay? Finding love in Pucara

‘HOW CAN I GET TO Pucara?’ I asked a guy sitting outside his shop after I’d hidden my room payment under the candlestick in the alojamiento. I didn’t know what else to do. ‘Ten minutes’, he said, along with some other stuff that I just didn’t understand. I sat down with my backpack and waited.

I looked around. The village of La Higuera was deserted and I wasn’t sure whether I’d get a ride, whether there were buses from Pucara to Villa Serrano, whether I’d be stuck in these tiny villages for weeks and weeks. It certainly wasn’t the worst prospect. I’d had such a pleasant, peaceful and welcoming stay in La Higuera that a few days longer actually seemed quite appealing.

Morning in La Higuera, Bolivia, and barely a soul in sight

But the car did turn up and an hour and a half later I arrived into the little mud hut maze of Pucara having done an hour detour through Villa Victoria and by the taxi driver’s house. Things to pick up there, stuff to do. You don’t mind, do you? he asked.

Of course not: the beauty of not being in a rush for once in my life. And the bonus? A sightseeing tour that took me really high into the mountains on the most precarious roads I’d seen yet in Bolivia.

High up in the mountains near La Higuera

In Pucara, the village drunk took a shine to me. Okay, that’s probably unfair, but he was definitely on the wrong side of tipsy and it was barely gone 10:30am. He gripped my arm and started pressuring me to drink some beer that he’d just poured whilst his team of merry men laughed on.

‘It’s not too early’, he protested when I tried to make my excuses, ‘and it’s not too much’. I realised what I had to do. After a polite sip I removed myself from the party, bought some snacks and started the long wait for the mid-afternoon bus.

The plaza in Pucara is an odd little place, a mix of stone pillars, mini metal railings, a water fountain that doesn’t work and some yellow concrete archways.

Men in wide brimmed hats sat around in doorways surrounding the plaza, and the chatter and laughter of children playing lassoo chase filled the air.

Kids playing in the plaza in Pucara

It was a couple of hours before what appeared to be the only restaurant in town opened but finally I heard some singing, a grace I guessed, and I made my way over to join a family for al muerzo. I’d already met Dolly outside, a girl in her late teens with a somewhat stern nature.

Whilst Dolly stared and ate silently, her family chatted away to me, and it really was mostly to me, although I did manage to tell them a little about my travels. They were curious about me travelling alone, about what I did back home. We talked about the Channel tunnel, about the economy in the UK and Europe compared to Bolivia. A random mix of conversation, part of an educated and better-to-do Bolivian family reunion.

Before I left and paid for my 15Bs. soup and chicken, potato and rice main, I made a quick visit to the loo, into the back of the house, dodging a huge hunk of meat hanging from the ceiling outside the bathroom door. The chewy contents of my soup, I assumed. My stomach had already threatened to go all South American on me and I hoped all would be well for my bus journey.

I passed the rest of the afternoon in Pucara sitting in the plaza, taking some photos of the town, writing and chatting to locals.

Two small boys noticed my camera and started to pose, falling over themselves with laughter when they saw their faces on the screen. ‘Again’, they said, giggling, ‘again’. 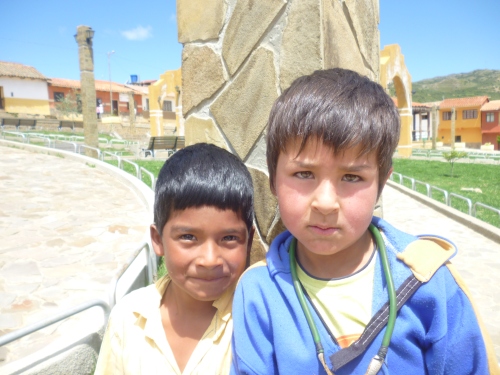 A serious pose before the silly ones

People dressed in Sunday best were gathering at the church with plaited palm leaves and flowers. I asked an old woman what was being celebrated. ‘La Misa del Señora’, she told me, ‘a religious festival’. The church bells chimed. Two men stood waiting with a donkey on which was mounted what looked like a male doll dressed up as a woman. I was a little confused, but then I hadn’t really managed to grasp the concept of the festival.

Donkeys and dressed up dolls

Gradually, the crowds gathered in the shade of the plaza. Three girls in flowing white gowns joined the group. There was a sense that something was about to happen.

‘You want to come along?’ asked the old woman, before muttering something about Santana when a guy drove past on a motorbike. I declined. I didn’t want to go off on a procession and miss the bus. 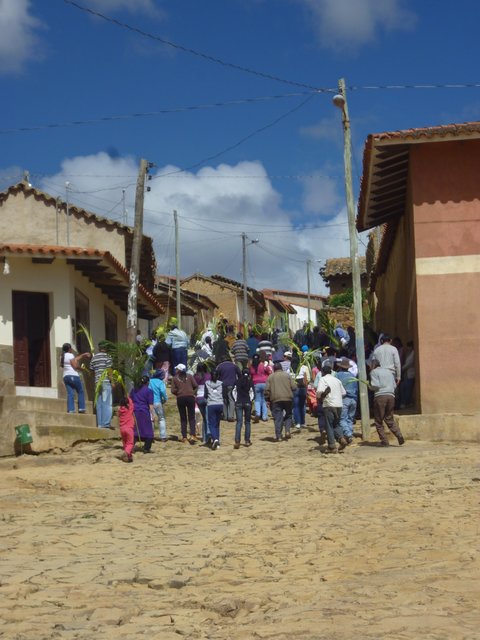 The procession in Pucara sets off

And the last hour wait was maybe the most significant in that it could have changed my entire life, had I been a little more open minded and more attracted to older guys.

Germán, a relaxed, somewhat rounded man in his late 70s came and sat next to me. We chatted a bit. In previous lives we’d both been teachers. He loved that we had some similarities.

It wasn’t long before he told me that he wanted to come and travel with me to Villa Serrano and on to Sucre. He took my hand and held it for a while. He playfully nicked my pen lid, then my pen. He gave my leg a cheeky stroke.

I looked out for the bus. Surely it must be on its way? And if the bus didn’t show? The alternative was for me to stay here and marry Germán and inherit a donkey and his three houses. He’d made a point of telling me about the houses, sure that they would seal the deal. If only I didn’t believe in true love.

A little girl with whom I’d been engaged in a face pulling contest for a few minutes left to find her mum who ran the village shop, leaving me fully alone with my would-be suitor. I started to write. 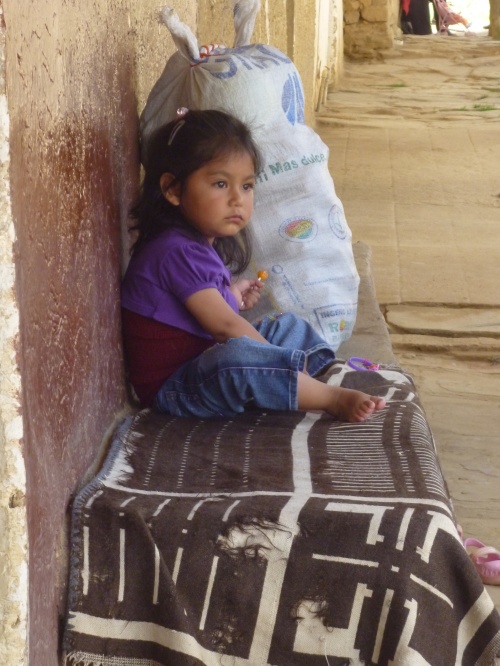 Germán was fascinated by my pen. ‘How much did it cost?’ he asked. I told him 8Bs, embarrassingly expensive, I realised, for most Bolivians. I told him that a good pen for me was more important than a good meal. He laughed and asked if he could write something. He moved in closer. He wrote me a note in my book, a love letter of sorts.

A love letter of sorts

And then he tried to stroke my bum. ‘Pare, por favour’, I said. Enough was enough. I stood up. ‘We could get a room together in Villa Serrano’, he said quickly. ‘No. It wouldn’t be nice to mi novio’, I said, trying to think of excuses and a gentle let-down. Germán put his fingers to his mouth. ‘Sssshhhh.’

A strong handshake, a strange little finger stroke on my palm and he left. Love affair over.

16 responses to “Shall I stay? Finding love in Pucara”