Wordless Wednesday #10: Celebrating friendship at the top of a tor 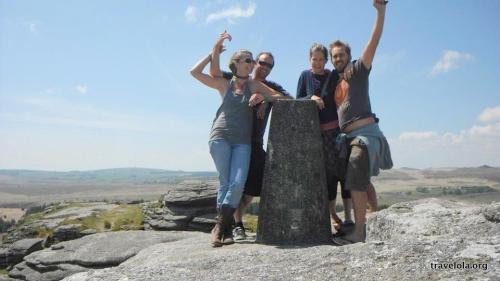 Back in England and still on the Banksy trail, this time in Bristol

Modern art: art that requires a car, an iPhone app and a sat nav

Back in England, the pursuit of Banksy continued. Whilst London appeared to be a bit too much of a widespread maze in which to get lost, Bristol – Banksy’s hometown – seemed the better option to seek out some of his work. Real life work in real life places. No prints this time.

It was to be a trip centered on technology. There are benefits, apparently.

D-man, a long time fan of Banksy’s work, downloaded the Banksy Tour iPhone app. We wove in and out of city traffic, up dead-end streets and down bustling suburb highstreets in our hire car, tapping coordinates and street names into the sat nav and scanning sides of buildings as we drove by.

Some works no longer existed, others were carefully preserved. It felt a little like a grown-up treasure hunt.  Each time that we finally found a piece I was filled with an indescribable bubble of something, not too dissimilar to joy or satisfaction, maybe, and we’d park up and go and stand and stare for a few moments, occasionally muttering critiques too insignificant to report.

Maybe the most gratifying part of this urban adventure was spotting unknown works that may or may not have been anything to do with Banksy, pieces that acknowledged his style, themes and timing.

Because in amongst a sea of scribbles and expressions, there are some conscious pieces, pieces that are angry and articulate and beautiful, and they’re not all by Banksy. 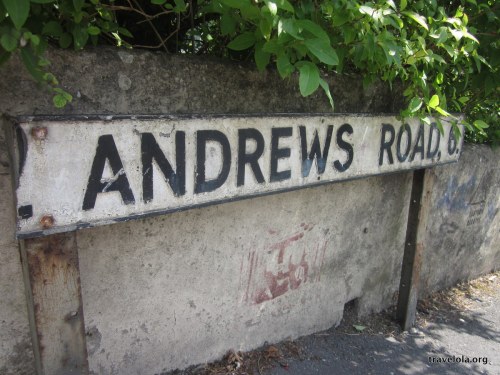 Heavy weaponry – original Banksy work given a chance to fade 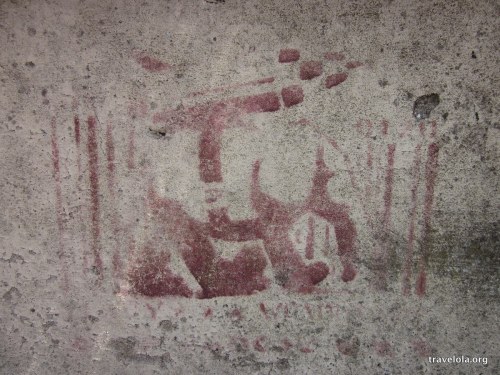 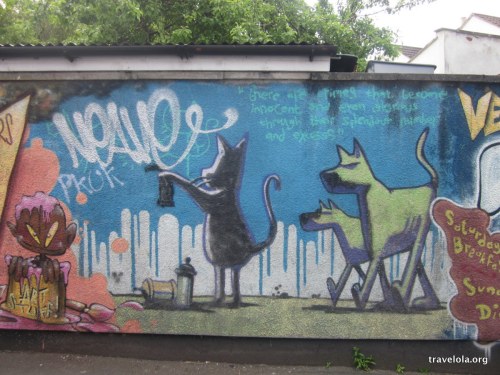 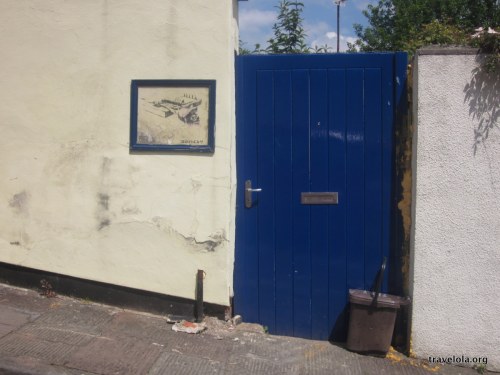 A framed rat trap up a steep side street 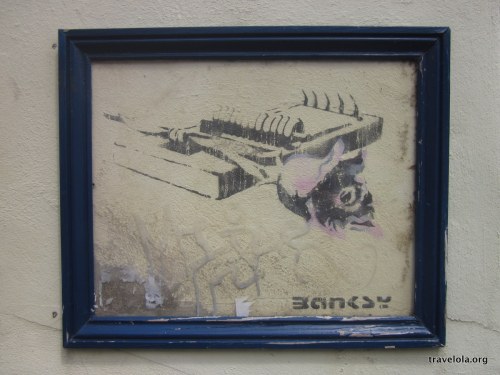 Rose in a rat trap 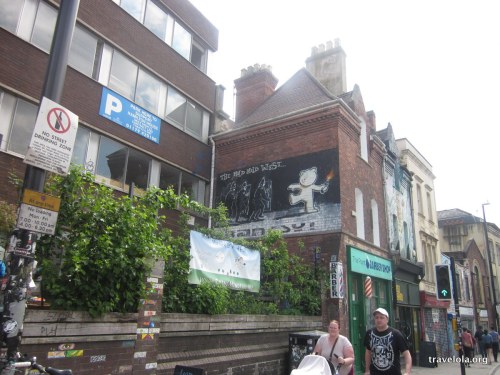 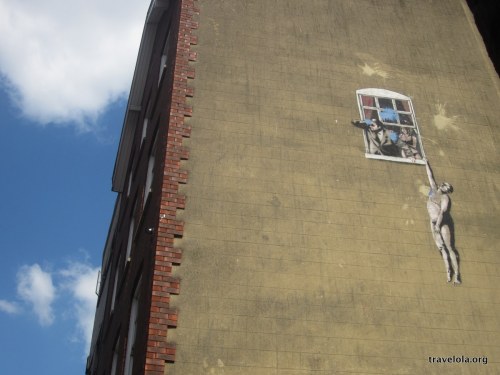 Well hung lover, naked man, hanging man, whatever you want to call it 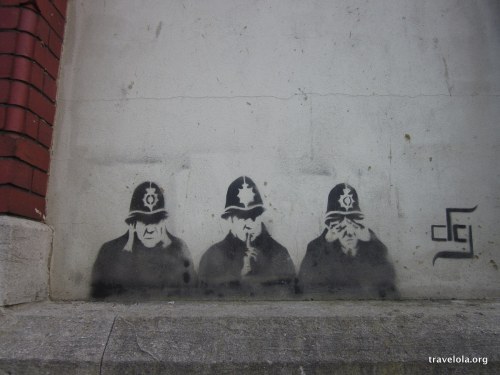 Is it a Banksy? Policemen are often part of his cast, but the tag says otherwise

Banksy has previously juxtaposed children with amunition, but the tag suggests this might not be his 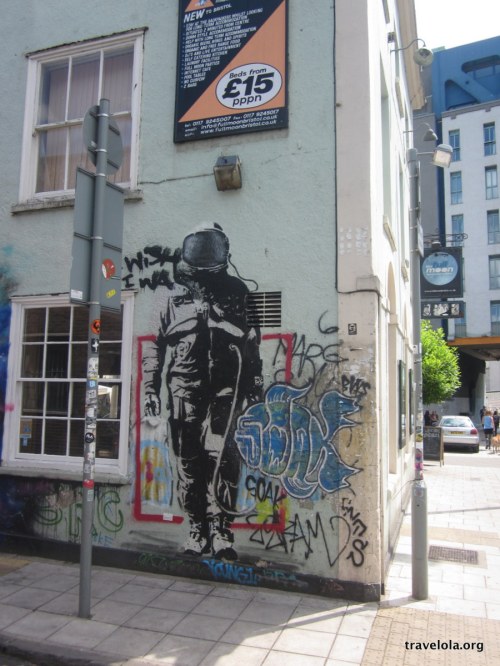 Shopping astronaut that we accidentally stumbled across… courtesy of Banksy?

Wordless Wednesday #9: Happiness, however you look at it 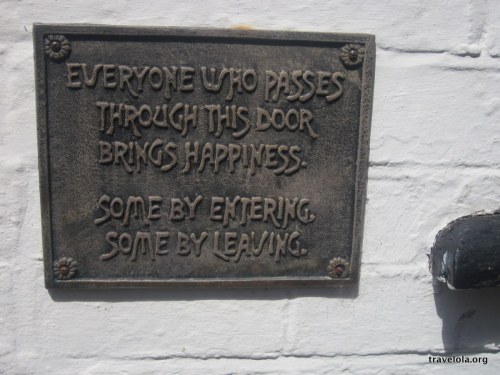 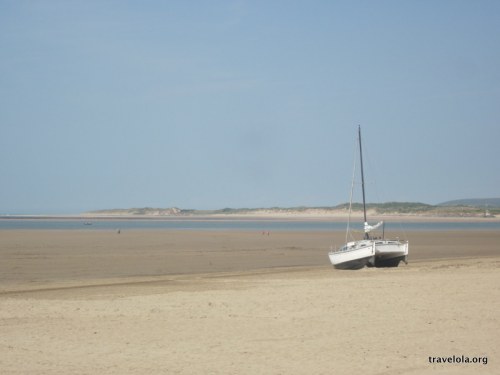 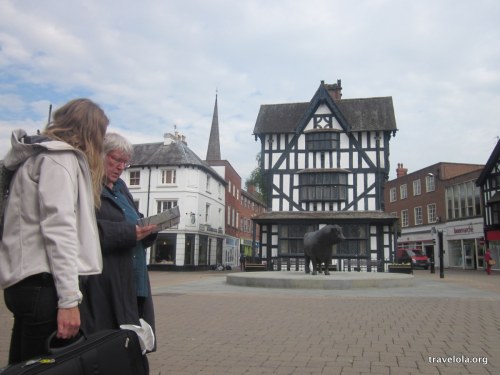 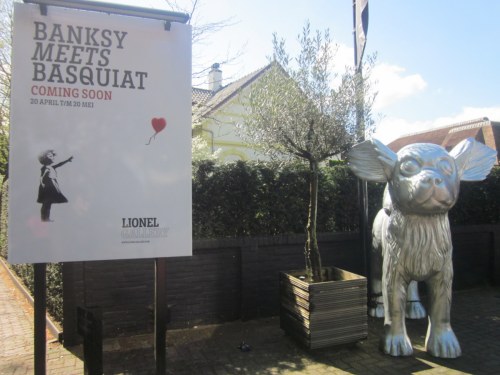 Welcome to the small town of Laren in Holland, where you apparently stumble across big names.

It’s early Saturday afternoon and I’m in Laren, an old, affluent arty town some 30km southeast of Amsterdam in the Netherlands.

I’m here to attend a Banksy exhibition, something that I find a little absurd. How can you take a street artist and put them indoors, restrained and commercialised? It seems almost to be bad form. And yet, here I am supporting it, kinda.

It just so happens that the day I’ve chosen to visit is the day that the Lionel Gallery have spread out the red carpet, trayed up the champagne flutes and parked a Maserati and a Ferrari on the driveway. It’s some sort of open day.

I am sporting a black hoodie and scuffed shoes. I have seen better days. In terms of dress code, I am definitely not the one expected to walk down the red carpet and part with big money, but not wishing to judge (or more likely, not wishing to miss out on a sale should I just happen to be one of the rich who likes to look like a scruff) the gallery staff treat me with the same niceties as all the suited and trendy media types who are mingling around me. 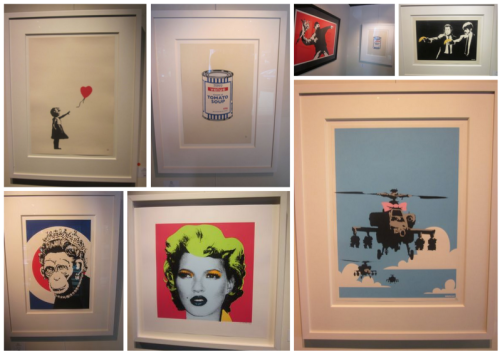 Prints for sale. Genuine ones. Not the $12 ones you might have seen in your local bookstore.

Banksy prints are dotted around this small gallery. The Bristol legend is sharing the stage predominantly with Basquiat, but I also notice gilded butterflies by Damien Hirst and some typically lavish LaChapelle prints added to the mix. There’s even a solo Picasso piece, tucked around the corner. An unexpected treat. 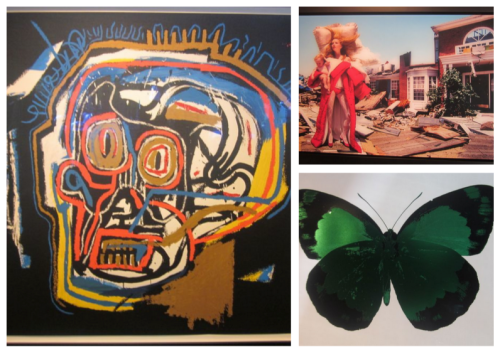 The pièce de résistance is an original Banksy, a spray can depiction, stenciled Fragile and framed. Banksy captured. There’s blind bidding taking place for this modern art piece, and some chats later I realise that: 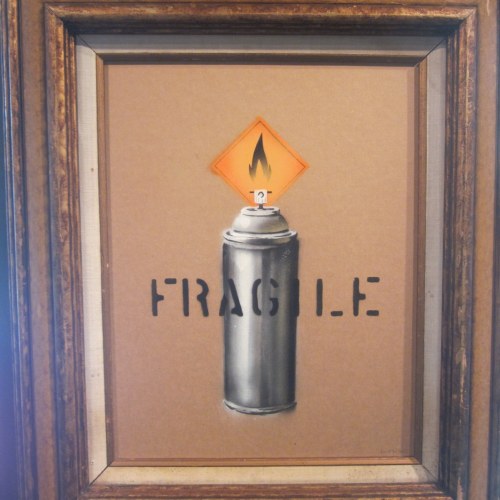 Months later, other than the fact that I like some of Banksy’s social commentary, I’m still not sure what to think.

And, to make matters worse, I never did get a glass of that champagne. 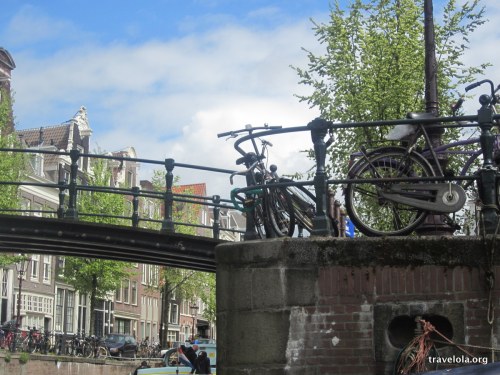 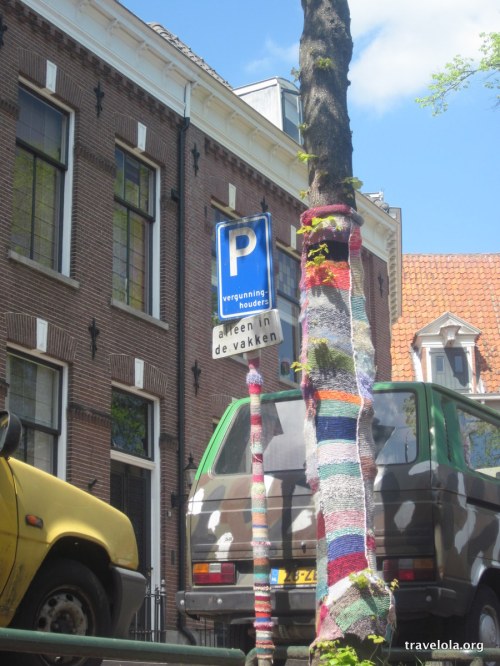 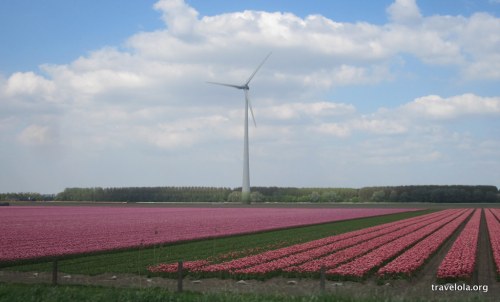 The secrets of Amersfoort

I’m standing inside a room, if you can even call it that. It measures maybe two by three metres. My shoulders are hunched, my head lowered, and I’m listening to the house owner tell me how an entire, extended family used to live in this room.

In geographical context: the historic, medieval city of Amersfoort

Just a few days earlier I was gliding along the canals of Amersfoort, onboard a boat, huddled on wooden benches with my aunt, uncle and a handful of strangers. A burst of budding leaves and flowering trees lined the waterways as the sun shone down on cobbled walkways and historic buildings.

I couldn’t have asked for a more perfect day to explore this ancient Dutch city.

Listening to the tour guide, I tried to pick out words but often referred to the English cheat sheet, noting dates that aged Amersfoort back to the late 1200s. 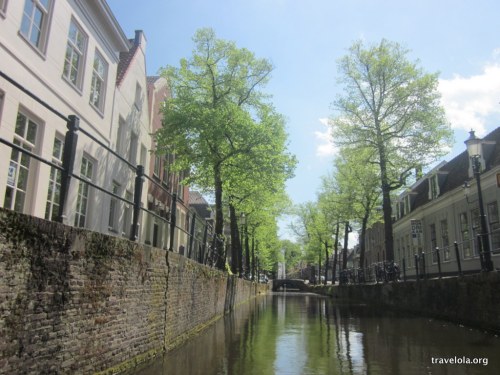 Setting off by boat

The western boat route took us by houses built into the first city walls and provided glimpses of Onze Lieve Vrouwetoren, a 98m high tower that not only provides a visual reference point within the city but houses the middle point of the Dutch grid reference system. We slipped under bridges and floated alongside water gates and the birthplace of the famous Dutch painter, Piet Mondrian. 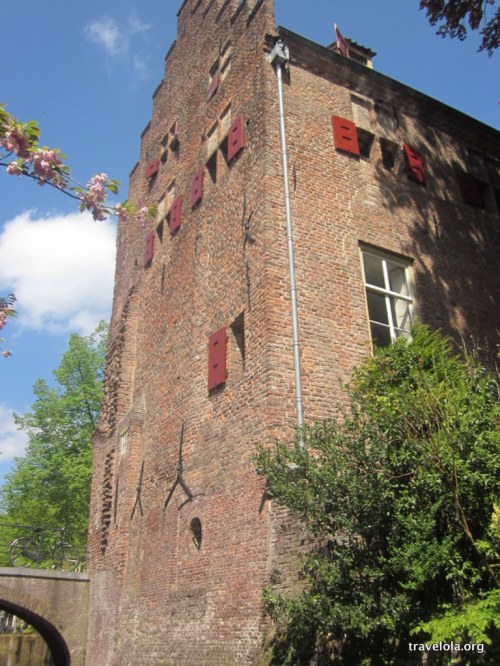 Houses that make up the city walls 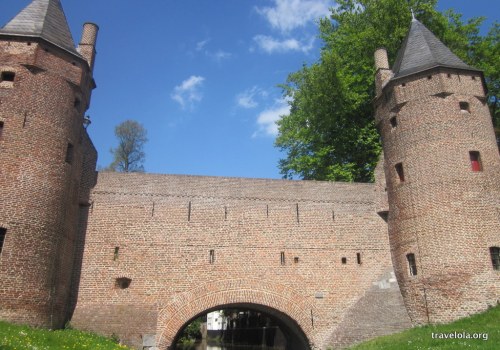 Drinking in the age of this little city, it was apparent that she had been well looked after. Despite her years, she was neatly presented, breathing out secrets of a long, knowing life.

Now, some days later I find myself as a guest inside the tall windowed grandeur of one of Amersfoort’s oldest houses, peeking in through secret doors and into the more recent history of the Second World War. A Jewish family hid away inside this little, little room.

It’s this kind of history, the human component, which really resonates with me. I stay for a short while, hunched and imagining how one lives a confined life, and a life full of fear.

And then the owner pulls away some wood to reveal a tiny window with views directly over to the synagogue. There, within those views, I realise, must have lain some comfort.