Marooned: what the hell do I do now?! 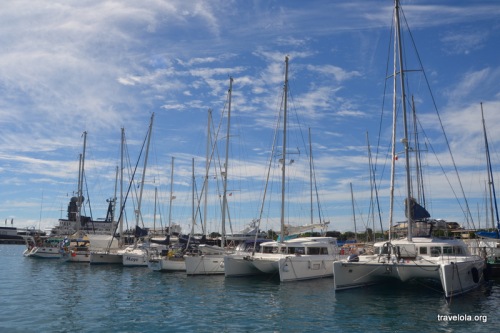 It was never a guaranteed that I’d stay on board all the way to Australia, and with space for only one of us, either Matt or me had to make a move to a different boat or a different whatever. The rules of the world dictate, first on last off. I had no problems with that.

It was only as we got closer to Tahiti that we finally broached the subject and thrashed out the reality of the situation. As it turned out, Matt wanted to stay on board, so I was off. It gave me a few days thinking time. As far as I was concerned, I had three, no four, options:

1)      Find another boat to crew for. The positives are that I might even find paid work, the negatives that most boats would want to do some exploring of the islands. Bora Bora? I heard it’s amazing, so why a negative? I wanted to get back to Oz sooner than August. I needed to go earn some money, catch up with friends and family.

2)      Find a stout Tahitian man and get stuck into island life. A beautiful place, who wouldn’t want to settle in tropical paradise? Nah, my ideals say that something like this, should it happen, would be spontaneous and emotionally driven, and not a calculated decision. And honestly, my heart was a little too distracted to really consider this option.

3)      Find a cheap flight to Oz. After nearly a year of being transient, I was ready to put down roots for at least a few months. My bank account suggested that it was a necessity to get some paid work quickly, particularly if I hoped to finally return to my family in the UK for Christmas.

4)      See what turns up. This approach has worked well for me over the last year. I’ve freed myself of the need to plan and be overly prepared. It’s liberating. Only occasionally has it fallen flat, like when I turned up to New Zealand not having booked a hostel after taking three flights. Of course, everywhere was fully booked because the Foo Fighters were playing that night. But generally, adventures and interesting experiences have presented themselves when I’ve just been open to seeing what turns up.

So here in Tahiti, I started to pack up my bags and prepare for pastures new.

What would life have in store for me?

The logical thing as a free-spirited, solo traveller would be to continue the sailing adventure through French Polynesia. But something else was pulling me in a different direction, no, not just the one thing, some things.

As I sat in the sunshine sipping a fresh fruit juice, gazing out at a fleet of yachts, Pride told me to find another boat, to do the full Pacific crossing. What’s another two months? he asked, you’ve come so far, why give up now? Because, I replied, I’m actually quite ready to stop for a while. Tropical islands are all well and beautiful but I want to be with friends again, be part of a little community that doesn’t dissipate in a few days, get somewhere where I can talk to doctors in English and get these tropical sores treated.

I recalled a friend’s wise words about there always being more opportunities to do things in the future. If I want to sail around French Polynesia, if it’s really, really important to me, I’ll find a way to come back. I wouldn’t be giving up, I decided. None of my adventures had had definite start and end points so why force this one? No Pride, you don’t present a strong enough argument.

Adventure perked up. You like Tahiti, right? Imagine more of this, more remote, more beautiful, more Bora Bora. People would sell their souls to get to Bora Bora. And then there are the Cook Islands and Tonga and maybe Fiji. You could spend months sailing, not spending much money, maybe even earning some, months enjoying waters perfect for snorkelling and diving and splashing about. You would be in paradise, away from the responsibilities of real life, putting off your return to rent and taxes and all things boring.

In many respects, it sounded appealing. Adventure talked my language, romanticised escapism, abhorred conventionality. But how realistic was Adventure? Did she not realise the power that denial and stresses played on the mind? No, life in its conventional sense of salaries and so forth needed to be addressed.

Responsibility smiled. Finally! he said, you’re starting to be a bit more level headed. Level-headed? I cringed. Maybe you don’t want to return to teaching, but drifting along will soon become tired. Know that you have lots of options. If you really want to be a little less responsible, if you really want to be a writer, he paused and raised an eyebrow, then you’ll still need to find some other work to cover your living costs. You may actually feel quite good earning money again, – you’ll be able to treat people and be independent and, if you must, save for further travels.

I thought about it. Responsibility was right. My return to Australia could just be a stop-gap. If it happened to extend into something more long-term then fine, but if I approached it as just another step in my adventure it would panic me less, and be less of a reason to run for the hills. Or the sea, in this case.

Finally, when I was ready, Love added her two pence worth and told me what I already knew. You have a friend in Australia who is soon moving on to pastures new, you have a cousin arriving into the country before too long and you have someone there who is so looking forward to your return.

Pride tried to butt in but Love was having none of it. She continued. Your family would be so, so happy to see you at Christmas, and I know how much you want to catch up with friends back in the UK. So lightly listen to Responsibility – he makes a few good points – and realise that the journey is never over. To continue your adventure in a meaningful way, you know what you need to do. And the stout Tahitian man that you mentioned? He’s not for you, dear. Leave him be.

Three hours later I had a flight booked to land in Brisbane, Australia. But first, another two weeks in paradise.

6 responses to “Marooned: what the hell do I do now?!”