A beautiful start to the day in Byron Bay

A dad rips at semi-fallen branches, leaning his body back until great chunks of wood pull away and fall to the ground. He clears up the playground floor, strewn in bushy branches before pushing his young girl on a creaky swing.

A group of lads walk down to where high tide meets a slim stretch of sand and look out at a messy ocean, a stormy sea with waves pushing in from miles out and tumbling clumsily into a heavy expanse of white water.

A middle-aged woman sweeps the outside of hotel rooms whose doorways reveal rolled up towels. Her lips are set stern as she brushes away leaves and grasses so that her four star customers get their tidy experience. She has yet to notice all the spiky, little leaves and streaks of dirt splattered across the door of Room 19.

One of many dead beach birds 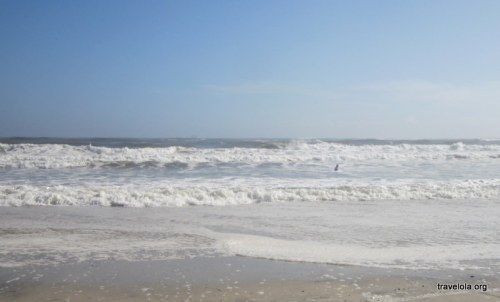 Swimming not advised… but under the watchful eye of the lifeguards, this guy was determined

A bit of chop compared to usually calm, calm days

It’s 8.30AM on Tuesday 29th January and I’m in the heart of Byron Bay, writing this overlooking the main beach.

Earlier I woke to a stillness that I hadn’t heard in a few days. ‘Don’t get too excited’, said my housemate D, ‘it could just be a lull. We’ve been predicted rain.’

But the sprinkling of sunshine pushing through the early morning haze did excite me. It had been over a week of dampness, the washing was stacking up and inside living was starting to lose its appeal. And it had been three days since Oswald burst into town amidst a flurry of downpours and winds that whipped at Byron Bay life, smashing over glasses left outside from Australia Day parties, reducing traffic on the roads, forcing people to retreat indoors and momentarily live without television and mobile phones and think about what we used to do before electricity became such a necessity.

For those still connected, news stations switched to live feed emergency mode, looping high energy reports of damage and chaos in Queensland, predicting disaster for Brisbane (whose nerves are still raw after the 2011 floods) and urging Northern New South Wales to be on high alert as the beast travelled southwards.

‘The media make me so angry’, said a colleague, ‘it panics the old people so much. If I hear 100 kilometre per hour winds again I will scream. We get these storms every year.’ And although yesterday news stations retracted some of their most somber predictions for New South Wales, there has  still been flooding in some local areas and quite a mess to deal with and clean up.

Queensland is where it did get really scary: communities have been left isolated, people have lost their homes and most tragically, three people died as a result of the storms. Down here, though, whilst there has undoubtedly been disruption and distress, more than anything Oswald offered a blustery reminder not to take the many, many calm and sunny days for granted. 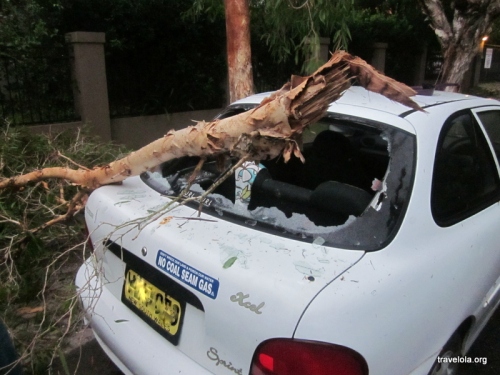 And now, despite the debris scattered on roads and roofs and the occasional sighting of boarded up windows and dented car bonnets, this beautiful day signifies that we’re safely through the weathering.

Until next year, then. Not before, please. Oswald shook things up enough.