Have you ever swum in a tea tree lake?

Until last week, I hadn’t either. I don’t think I ever actually knew that they existed. There are a few dotted around the Byron Shire area of New South Wales in Australia, so after a busy morning working and sweating in high humidity, I decided that I would wash away the day with a dip in a nearby tea tree lake. I also hoped that it might give my skin a bit of a treat. 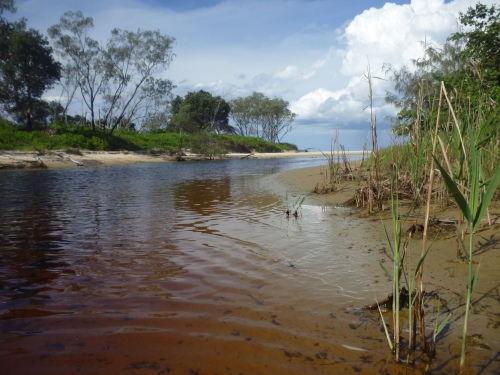 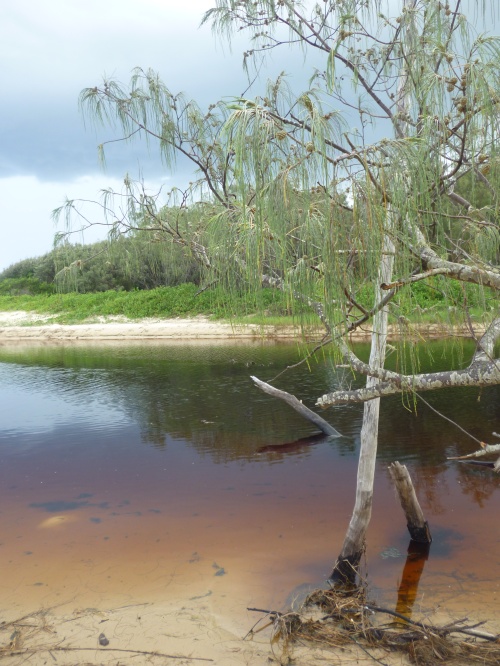 On the banks of the tea tree lake, NSW, Australia

The previous night had brought with it a storm straight out of the movies; sheet lightning blinding the sky, building thunder rumbles. And lots of rain. The tea tree lake was bound to be full.

Off I set along the beach, a wide and perfectly sandy stretch of seashore. I scuffed my feet along the fine grains, never tiring of the squeaking sound. Such simple things.

The first post-storm sign was at the mouth of the lake-to-sea-stream; often running dry or as a gentle trickle, today this bubbling cola mix that I had mistaken for sewerage when I first arrived was ripping apart the sandbanks as it surged and blended with the warm, blue ocean. Not that the sea gulls cared: they clustered and bobbed around, seemingly enjoying the frothy, health-giving mixture.

‘It’s the best time to be out here’, said a local guy who showed up just as I was chilling out by myself in the shallow depths of an area that is often empty. His lips were zinced white. ‘Tide’s going out so it pulls away all the algae’ he added.

It made me wonder: if algae was best avoided, what else should I be aware of in this place? I’d already asked some friends whether there was anything to watch out for and they had been pretty blasé. Sure there were snakes in the bush, but just don’t trample around into the bush.

When I’d arrived at the river and headed up towards the lake, I basically got stuck. Levels were too high not to go into the bush. So I had paddled up river and settled on a spot just short of the main lake.

‘So is there anything in the water that I should look out for?’ I asked Mr. White Lips. It turns out not. He ducked under, splashed around a bit, we chatted and then he left me once again to my solitude.

Taking a moment to observe, think and be

Warmer waters skimmed the surface, cooler currents pushed through underneath. I submerged myself, assured that all the little fish were harmless and that no nasties were going to interrupt my Zen state of play.

I sat in the shallows and listened and watched. The sound of the ocean was less audible, even the bird song seemed to melt into the distance as the splendour of the sun shining through clear red and yellow and green tinted waters dominated. A visual treat. And so peaceful. 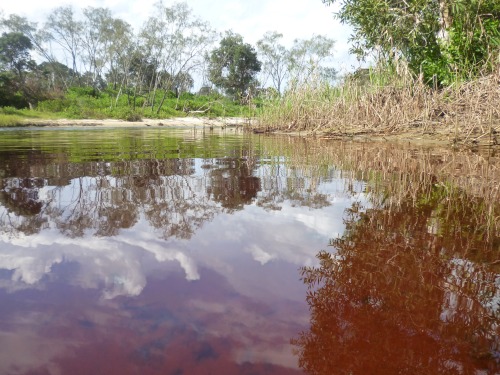 Colours and reflection in the tea tree lake, NSW

Colours and reflection in the tea tree lake, NSW

I expected, no, hoped to emerge an oil covered, beautifully skinned being. Neither happened.

3 responses to “Have you ever swum in a tea tree lake?”