If you go down to the woods tonight…

The jungle at night is not somewhere you’d want to be by yourself, our guide told us. Scorpions, spiders and other dangerous creepy crawlies and animals make their way out of hiding when dusk falls. One wrong move could put you, at the very least, in some serious pain.

Head torches on, we walked single file and slowly through jungle pathways, flashing our lights everywhere to avoid stepping on bugs or bumping into snakes or spiders hanging from the trees. But we also walked slowly in order to spot things.

Nearly walking into a shiny spider thread, I followed it with my torch to a perfectly formed web on which sat a huge spinning spider. This was the first of many. 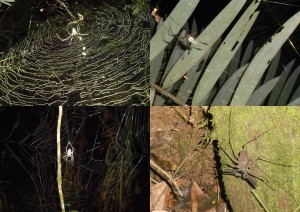 Others spotted dart frogs, a cluster of rash inducing hairy caterpillars, tree frogs, a tarantula. We saw scorpions, an anaconda, giant grasshoppers and the stickest stick inset I’ve ever seen. We didn’t see any wild cats or boars but with ten of us walking in succession, it was never really an option.

Switching off our torches to listen and adjust to the natural jungle environment was a magical moment. No speaking, no shuffling, – just the buzz of the insects, a musty, earthy smell and the warm heat rising from the ground.

One response to “If you go down to the woods tonight…”