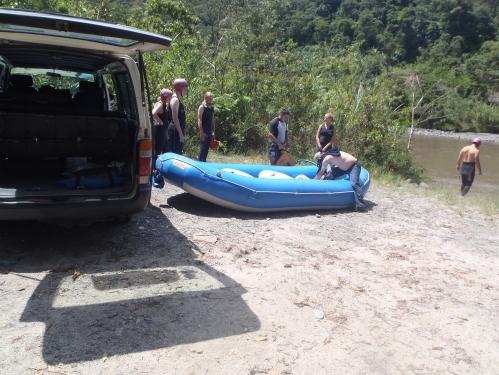 Getting ready to ride the rapids

I met Dan and Amy, a British couple, in the hostel. After two days mooching about Baños by myself recovering from yet another bad belly, I was ready to be social again. ‘What are you doing tomorrow?’ I asked, initially more out of polite chitchat than anything else. They had booked up to go rafting. ‘Want to come?’ said Dan.

Earlier I had been talking to an Israeli family who had just come back from a rafting trip and they couldn’t recommend it enough. ‘You have to try it’, they said.

‘Is anyone else booked up?’ I asked Dan and Amy, ‘I wouldn’t be crashing some hot date?’ They laughed. ‘A hot date rafting?’ I didn’t see their point. Maybe my idea of a hot date is slightly skewed. Needless to say, I took their response at face value. I booked up for the trip. If secretly they had wanted a hot date, well tough, I was tagging along.

My alarm went off at eight. I woke up at nine (good earplugs, frustrated neighbours). They hadn’t left so I did my quickest ever getting up. Five minutes later I was in the minibus with a fruit salad picnic that the hostel had kindly made me for my breakfast.

So off I went with Dan and Amy, with Frank and Megan, with Gareth and Camilla. This was one big date crash.

‘I am your man’, said Luis, our guide, and the lights faded and our eyes met. No, not really (well, he did say ‘I am your man’ but he was sharing the love, generous guy). In actuality, none of this was romantic at all: it was a sticky, sweaty sun cream day and we were kitted out in fetching wetsuits and fat helmets. I worked the look by putting my sun hat underneath. Everyone looked a bit silly, especially me.

‘We’re going to travel for forty minutes’, Luis told us, ‘The river is a level 3, good for beginners. Then we go to a level 5 and flip maybe’. Did he know this was my first time? Treat me gently!

After the debrief where the hot sun started to fry our gringo skins, squelching around in the volcanic sand and dipping my toes into the water felt amazing. I wanted to fully submerse myself (that comes later). We started to paddle. We rode a few mini rapids. The strong, burly guys were up front, responsible for guiding us through any rough patches.

And then the guide pushed two of the crew overboard. Okay, not really, but they jumped overboard and we practised rescuing them. Megan didn’t look too concerned that the raft was leaving her behind and even when the rapids got her she remained calm and happy. She was rescued, of course, and came back on board cool as a caipirinha.

We all had our time overboard. My rescue was more traumatic as I smashed my foot on the rock bottom. Not quite so cool.

The level 5 rapid was short and fun and we rode it up and down, up and down, whooping as we went. On the other side we did the practised oars to the centre and ‘Ecuador’ chant and celebration (think group high five). None of us were too cool for that, not even Megan.

And back to the romance element, well, I still reckon rafting has the potential to be a pretty hot date. Sure, most of us were paddling like mad or hanging onto the side ropes or ducking passing debris, but the adrenaline of the entire activity, that’s gotta provoke some passion, right? And few could deny that the quieter moments of floating along a mountainous, jungly scene or stopping off to shower in a waterfall, were steeped in romantic association.

No one seemed to care that I’d crashed their dates, in fact as it turned out, not everyone was dating (although I have my suspicions that the rafting trip may have changed that for two of the people).