Walking towards the unknown

The airport had been shut down. No one was allowed in. Police pointed us along cordoned off walkways, away from Arrivals, away from where my mum would be waiting. We were displaced ants, stumbling confused inside a massive, empty anthill.

D-man was here with me, his first trip to Europe. What a welcome.

We queued as per usual for passport control and customs. People muttered. No one knew what was really going on. No one would tell us. Something about an abandoned car? A car bomb, maybe?

Dusk was falling. Like a scene from a post-apocalyptic film we dragged suitcases up the centre of a road sided by concrete towards silent flashes of blue and the next set of instructions. Neon yellow policemen jackets stood out against the low light greys, orders barking out of big guy mouths.

‘Going saaarf, get in that line. Norf, ova there’. Arms flailed.

I didn’t know how I’d find her, but I did, holding a place in a queue of people trying to push on board a snaking bus.

And finally, after nearly two years, I got my mama cuddle.

Time for a rooftop swim? Probably not. (Pic from nationalgeographic.com)

The New York Times lists Singapore as one of the must-go places of 2013, and so, as a lover of lists, I ensured that I found time to drop in and explore the ‘densely populated city-state’ that is gaining  recognition for its green credentials and leading the way in vertical farming.

Only I had about, oh, forty minutes to explore the place. What snapshots could I get of this city country?

We were arriving in from the south-east, up from Australia and my legs were starting to swell after eight hours of inactivity. I circled my feet as I looked down over a palm-fringed coastline and a port dotted in big boat traffic.

Singapore. A place that sounded exciting and progressive and buzzy, yet somewhat terrifying to someone like me who craves space and openness and a calm retreat.

The airport (and this was all the ground level, stopover sightseeing that I was going to get) had a retro-futuro ambience and an east-west blend of facilities.

No way. Not today. These legs of mine need walking.

A well-fed, moustached businessman – some airport official – whizzed by me on a segway, into the belly of a grey-brown-orange colour palette. I skirted the sci-fi appeal of the travelators and got my legs marching, all the way to the toilets, where I joined a queue and waited in line for the seat toilets whilst others queue jumped to the squats.

I wondered why I made the decision to wait. Familiarity? Previous travels in Asia and South America meant I was fully okay with whatever facilities were on offer, and who sits on public toilet seats in any case? ‘Maybe if I was  really desperate’, a middle-aged women said to her friend, and they giggled but stood firmly in line.

Ducking out of the way of a speeding buggy loaded up with suited types, I did another lap of the travelators, watched a film star from the 2005 indie hit movie, Waiting, get accosted by two fans, and went through an oh-so-stern-and-somewhat-confusing security scan. I counted down my last Singapore seconds to the soundtrack of an MTV assault.

There hadn’t been enough time to get out of the airport confines and touch and feel the ‘high-rise buildings, landscaped gardens and heritage-rich precincts’, and I didn’t get to experience the ‘harmonious blend of culture, cuisine, arts and architecture’ of Singapore. But whilst I was pretty damn disappointed with what I’d seen of the place (it was just, well, an airport, much like other airports) I was one journey step closer to London.

London, where I anticipated everything would run smoothly: flight landing on time, bags arriving – intact – after three country transfers, my mum waiting with an armful of cuddles.

MAYBE I WAS JUST GLAD to be getting out of Pucara and away from the prospect of a marriage of convenience that would have seen me living small, Bolivian village life, running three rental houses and caring for an old husband who would surely be well on his way to incontinence. Maybe my favourable account of the bus journey from Pucara to Villa Serrano and then on to Sucre was therefore skewed.

But hang on. The landscape was beautiful and the variation in terrain as we descended from high altitudes to the warmer climate of Villa Serrano was well worth noting.

Steep, winding mountain roads wound down past cacti the size of trees along rubbly ground where a sparse covering of shrubs with exposed roots clung on to dry, stony earth. 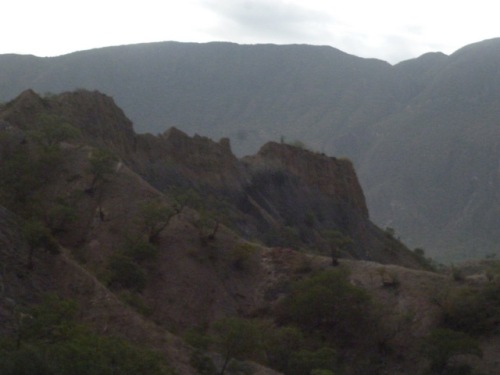 Rocky landscapes on the way from Pucara to Villa Serrano 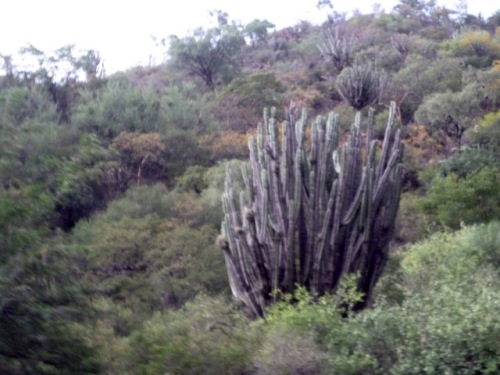 Cacti bushes and trees along the way to Villa Serrano

The crowded bus continued on through dusty canyons and alongside wide, dry rivers. Dust swirled through the bus, coating everything. The teenager in the seat in front of me sat hugging an old school ghetto blaster whilst he puked out and down the side of the bus, the warm, sweet fumes filtering back in through my open window. 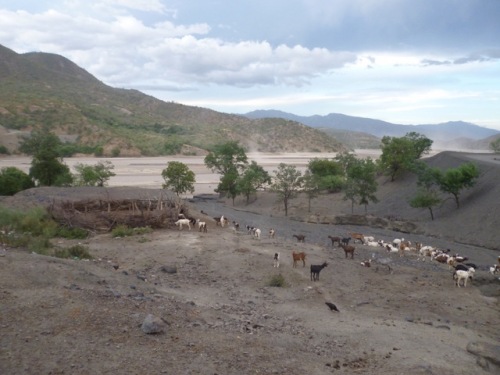 Herding by the river

At parts, the road was really terrible, huge chunks missing. The bus momentarily crawled alongside browny-orange landslides and inched across and around gaping cavities whilst I held my breath. We always made it. Skilled drivers, aided by the sign up front that stated seguir a Cristo. As on most South American public transport, we were being looked after by the total trust in religious iconography. All good.

As dusk set in, mountains silhouetted against a clear sky. The guy next to me got off the bus, no houses in sight, the middle of a dark nothingness. I wondered how far he had to walk still. It was gone 20:00pm.

Night arrives on the way from Pucara to Villa Serrano

A little boy jumped into his seat. I dozed a little, waking only when he started to blow raspberries at his friend and screech and clamber over me to look at the moon. ‘¡La luna es aqui!’ he babbled, and his friend joined him by the window, which was also my seat and my lap. Two unknown three year old kids with knees and elbows digging into me? At least I had somewhere to sit.

A little later, having reclaimed some space, I woke up to my hair being stroked. The little boy next to me was now singing gently and playing with my hair, no inhibitions.

Within another hour we arrived into Villa Serrano and I wandered through dark streets with my head torch trying to find somewhere to stay.

Electricity in the town was down. My little venture away from the modern, English speaking world with all its comforts and trappings was set to continue for at least another day, and I certainly wasn’t about to complain.

After a short night’s sleep and a chilly shower, I was back on a bus headed from Villa Serrano to Sucre through a landscape of hills covered in grasses and trees.

It was an early morning start. Wisps of mist hung in the valleys and mountain peaks stayed hidden in the clouds, shadows streaking across their green, grey bodies. The sun shone out gentle, light rays onto little mud brick buildings with grass roofs and red tiles, waking up the folk in the farmsteads that we passed.

It was flatter and greener in the valleys, dry rockiness visible every now and then alongside corn fields. Yellow sunburst flowers on long, leafy stalks sat next to short, fluffy tufts of plants, delicately blowing in the fresh morning breeze.

On board, women sporting plaits and wearing warm, woolly hats carried small children bundled up in blankets. I played peek-a-boo with a little girl in front of me whilst a young boy looked on shyly, smiling when I caught his eye. Again, the only gringo on board. The elders were politer but the children were curious. I tried to remember being that young, but all I could really recall were my mum’s stories about how I chatted away to everyone.

The rest of this journey took us past more cacti; some small and spindly, others still the size of trees. Amazing towers of red rock rose up on the roadside just over an hour into the trip before we finally arrived at flatter farm land and paved, concrete roads. The bus sped up, onwards to Sucre.

So what was so special about this journey?

Predominantly, this was about the amazing, varied scenery but also the experience of being in amongst the locals with not a tourist in sight. It was also a much more interesting way to get to Sucre, and a cheap way to cover some substantial ground.