Not getting barrelled at Teahupo’o

Teahupo’o. Having shared a big chunk of my life with someone who breathed, dreamed and lived surfing, I was somewhat educated on the waves of the world. And Teahupoo? I could fairly easily recognise the wave in a picture, that crazy, powerful reef break that has surfers around the world dreaming of making a trip to French Polynesia.

I’m a rubbish surfer. It used to wind up my ex. How can you surf for six years and barely progress? He wanted to be able to ride a two foot wave with me; actually, just riding a wave together – any wave – would probably have sufficed.

If I actually made it out the back, I stalled myself out of waves, freaking that they were too big for me. Often I was happiest on the smaller, reformed waves closer to the shore, or riding the white water when I got bored of waiting for a ‘proper’ set to push through (although when I started to finally take the little drops and get on the faces of waves, the white water lost a bit of its appeal).

Realistically, one to two foot on a sunny day in the UK suited me perfectly. I don’t like rips, I’m a bit over mid-winter surfs, and the necessary evils of stiff 5/4mm wetsuits and a full booty-glove-hood get-up makes me tired just thinking about it. I have, I suppose, given in to the fact that I am never going to be one of those girls that rip, and that maybe I am indeed a fair-weather surfer (yet, actually, if the waves are right on a British December day then I’ll definitely get in the water for a splash around, just don’t give me a biting wind and a troubled sky). 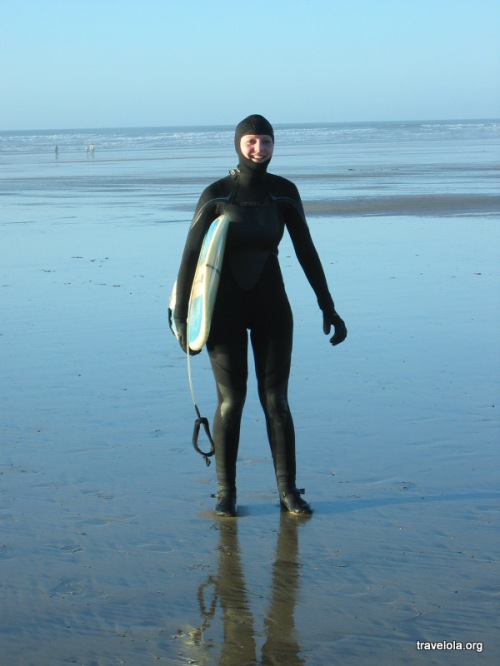 Not much happening wavewise back in Devon in the winter of 2007… but it’s sunny and I’m smiling.

There was no way, then, that my trip to Tahiti would include me undertaking the giant paddle out to the Teahupo’o showpiece and scuffling for a place in the line-up.

But I wanted to see the magic first hand. I felt that this wave was part of my history, a wave that had been part of conversations and memories and dreams. So I wanted to see the wave and its birthplace, I wanted to experience the magic of bobbing about in a little boat close to the crashing power, and I wanted to watch surfers get barrelled, get air and then bail off the back before the wave closed out and slammed them onto the jagged reef.

Watching the action up close (*not my picture).

From photos and calendars and videos, I knew what it should look like. So why the disenchantment?

Together with my Pacific crossing crew mates, I arrived into the village of Teahupo’o and to a little beach at a river mouth. The only people around were a few kids riding the beach break, twisting and turning on boogie boards, a couple more on stand-ups. The café was closed, the houses empty, the narrow, stony beach deserted.

By the river mouth at Teahupo’o, Tahiti

A couple of boats were moored up by a house but captains were absent and a ride out to the mighty wave began to seem unlikely. I looked out to sea, out past the flatter near-water to a section of crashing waves that occasionally delivered a peel and spit but more typically smashed down on to the reef without any form. Closing out. Surely no one would be out there today trying to surf? I squinted but it was no good. I saw no one. 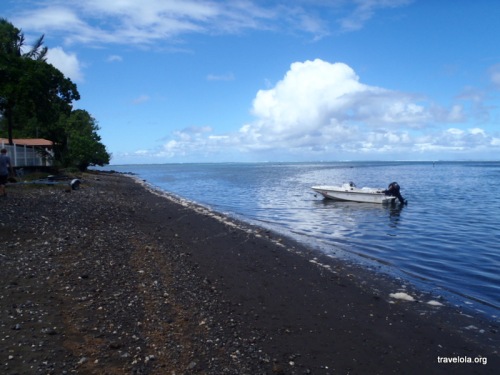 Shall we just borrow it? 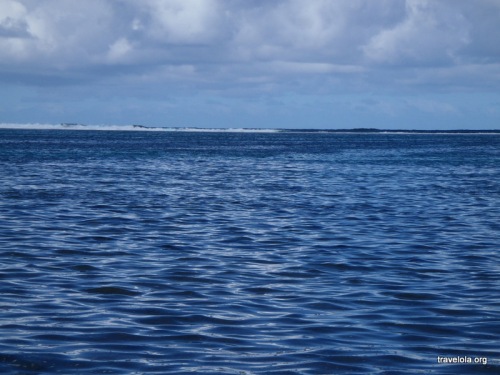 Kinda doing… not much

After a wander through the ghost village and along a rocky, coral beach, we weren’t any closer to the wave or to scoring a boat ride. I wondered if some of these houses were even occupied by locals and just how different this sleepy place was when the annual Billabong Pro surf comp came to town.

A hint of what Teahupo’o has become?

I gave up on getting out there to see it up close, and retreated back to the hire car. The only friends we made were some stray dogs. Oh, and one of the teens who gave us a wave as we left.

No barrels for me, or anyone else it would seem. Maybe I should have done some research before I left? Sometimes things just work out. This time it didn’t. Back to the perfect waves of picture books, then.

Having picked up some maps at the tourist information by the docks, planned a few desired stop-offs and hired a car for the day, we were ready to drive the coast road that wraps around Tahiti Nui and smaller Tahiti to the south-east. The constructed concrete and development of Papeete slowly faded into the background as we sped south down the smooth roads of the west side of the island into a scene framed by thick, dark green trees and mountains that raised up from the roadside.

Our first stop was at Grotte de Maraa caves barely 30km south of Papeete, a public garden bursting with every tone of lush green imaginable, despite being but a machete strike away from the main road. The detail of fanned leaves, the variation in plant patterns and the odd splash of water and other colour created a world in which I wanted nothing more than to walk alone and once again get lost in the thicket of nature whilst Joel and Matt headed up into the jungle, following an overgrown path. 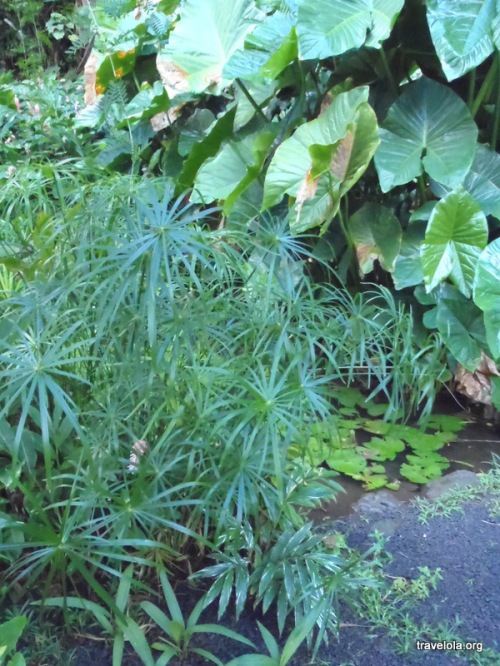 Plants and water and happiness 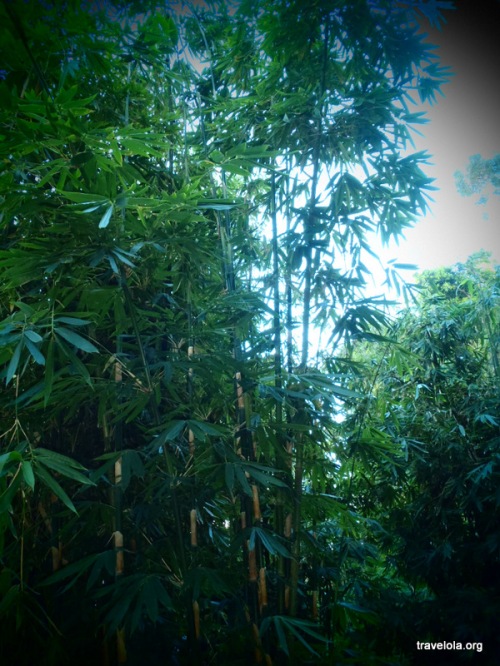 The caves themselves gave cover to pools of water on which lilies clustered, some white petals on display. To the side of the main cave was a sign hidden behind foliage that stated No lifeguard on duty, surely a joke of sorts. Matt went for a paddle and the water barely reached his knees (although apparently further into the belly of the cave it drops away). 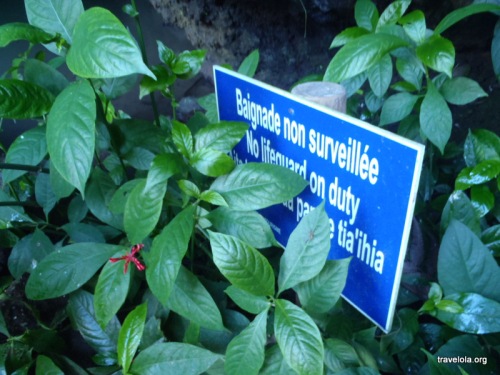 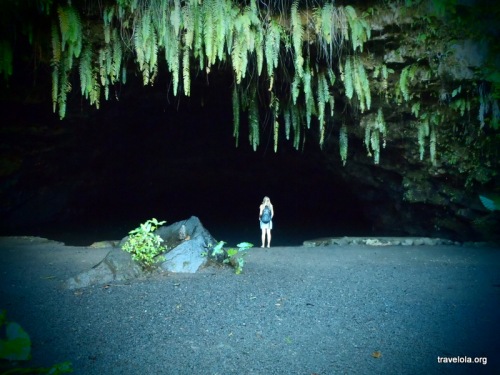 Back behind the wheel and we drove on down to Teahupo’o on Tahiti Iti, Tahit Nui’s little sister joined to the main bulk of the island by a slim stretch of land over which passed two roads. A few young teens body boarded on little waves on the edge of the village whilst the infamous Teahupo’o break smashed about a couple of kilometres out to sea. We walked by empty houses and quiet air, accompanied by a stray dog. 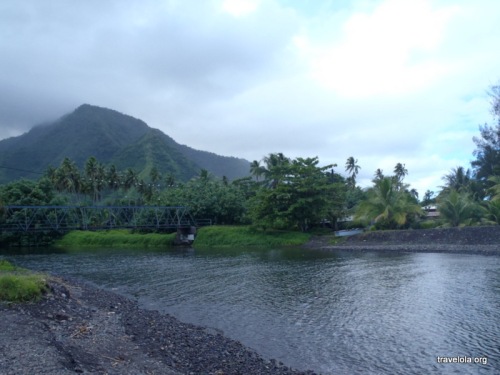 Arriving to the village of Teahupo’o

Hanging out on the wire looking out towards the famous break

Shall we just borrow it?

On the way back up north we decided to head to the Taravao Plateau, stopping first at a little spot off the beaten track by a river where we dunked in cool waters and got nibbled by creatures in a murky river bed. At least I did. Joel and Matt, my crew mates from the Pacific crossing, swam against the river flow, then let themselves get carried for a little while. I guess it had been a long time at sea without exercise. 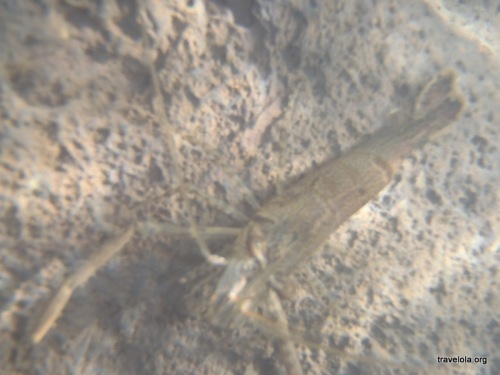 Capturing the creature who had a good nibble on my toes

The boys think about stretching their legs again

The viewpoint of Taravao Plateau itself took us out of the jungly lowlands, high enough to get a wide look over both parts of the island. A little hut shaded us and the gentle yet constant trickle of tourists who pulled in for a quick glance. Beer tops, a few empty bottles and a smattering of graffiti hinted at a place that went beyond that of a lookout. This place saw it all. Or some variation, at least.

Views one way… down to Tahiti Nui

Views from the same spot

Our last stop-off was driven by the need to get to the water’s edge once again. Whilst the west coast beaches seemed unreachable and – where visible – chunked up with rocky entries, the east coast offered up a good dose of sandy beaches. Finding an unmarked place to pull in, the boys were quick to the water whilst I lay down, full stretch, and the warmth of the sand against the length of my body made me sleepy.

I dozed through all the fun – the body surfing, the local kids playing up to the Go-Pro camera, the refreshing splashing around – and roused only for the homeward stretch, a half hour drive with a red dusk sky backdrop

And we were back. In Papeete, at the pontoon, within the rock of the boat. Home.

Sail me to the coconuts

The time arrived. I was really going to do this: sail across the Pacific Ocean from Galapagos, Ecuador to Tahiti in the Society Islands of French Polynesia with a crew I’d barely met and a captain who sounded experienced and sensible on paper but where I had no real certainty of the weighting of his reputation.

‘Trust your gut instinct’, a friend told me, ‘if it doesn’t feel right, don’t get on the boat’.

Another friend told me a horrific story about a guy who had spent a two week ocean crossing being raped by the skipper so as not to be thrown overboard. It seemed like the worst scaremongering story out there, surely something so sick couldn’t be true?

Rather than making me fearful of life, travelling has taught me that with a bit of savvy and a good dose of openness and interest in the world, the chances are that good people will enter your life. Call me naïve, if you like, but the people whom I’ve met and the experiences that I’ve had have helped me to re-trust life. At some point you have to trust, I think.

So here I was, keen for a sailing adventure, excited to be doing something so spontaneous and random. Of course, if it felt even a bit dodgy, I wouldn’t step on board.

Once again though, life threw me a trump card. The captain and crew, on early impressions, seemed pretty sound. All men, I had to feel okay about spending at least three weeks non-stop with this little clan who had already established themselves on the sail over from Panama.

I decided to go with it.

Although I was only guaranteed a ride to Tahiti (mainly because there were no stops between Galapagos and Tahiti), I was hopeful that if I pulled my weight they’d keep me on as crew for the next leg to Tonga and then Coff’s Harbour, Australia.

But no plans. Go with the randomness and see where I end up.

So, sail me – no, sail with me – to the coconuts, to the exotic paradise of Tahiti where the beautiful, world-class surfing wave of Teahupoo peels a couple of kilometres out to sea, where the award winning tribal tattoo artist Mana Farrons makes his home in Papeete, where wild pigs roam the forests and where palm trees fringe beaches of white sands and fallen husks.

And where my fantasies of tropical life will meet with their reality. How can I be disappointed?