Uppity in the budget airline air 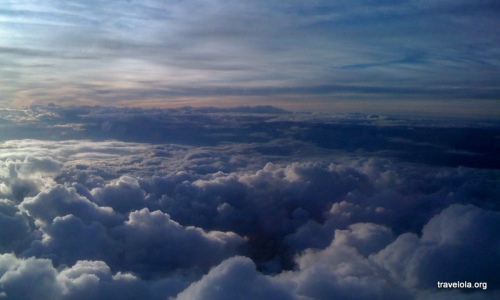 I was strapped in, ready for the flight from Gold Coast to Melbourne.

An old woman in her early eighties appeared near the top of the airplane ladder. One hand gripped the handrail, hoisting herself up, the other jostled around a wooden walking stick. She hesitated at the doorway, looking back.

‘Come on,’ said the air hostess. Her smile stretched across perfect teeth and the words hissed through. Ms. Smiler, I am observing you.

‘Oh…’ said Joan, the old girl, ‘…I’m… my husband…’ She turned back towards the temporary stairwell.

Another girl took over, genuine smiles this time.

‘Look! We match!’ she said to Joan, lining up their orange shirt sleeves.

Joan settled but peered over the seat. Her husband, Derek, was getting craned up and into the aircraft, and as it set him down on the entry ramp, Joan grabbed the headrest in front of her and tried to stand up. Smiler hurried Derek in, push push, gently done but push push nonetheless. He too settled and Smiler seemed satisfied.

Smiler stood in front of me, D-man and a middle aged, middle-heighted guy with a deeply furrowed brow.

‘You are sitting in the safety seats. Are you willing and able to assist?’

She acted out a monotone charade. I guessed that she’d probably struggle to hold back from being the first down that emergency slide should our plane face misfortune.

A well dressed businessman with trimmed hair and an expensive looking briefcase stepped on board. Smiler actually smiled. Proper.

‘How long are you in Melbourne for? Any plans?’ she purred. She may as well have lain down and presented, then and there, so obvious was her change of tone and interest.

The last passenger came aboard, a slip of a fine haired thing who lightly stalked to her seat amidst a fluster of flyaway hair, and then the plane took off and flew high above a dense, fluffy cloudscape that undoubtedly meant a dull day was being had by all below.

As we flew into Melbourne nearly two hours later, I glanced over at Smiler who was strapped down for descent. She caught me looking and gave me a broad, fake smile. A learned response? Maybe it was actually genuine? Maybe.

Maybe she was just totally out-air-hostessed. Maybe she was bored after years of short haul flights, of watching people peer out of windows at patchwork landscapes, of damn well smiling when she didn’t feel like smiling.

Mr Businessman certainly set alight a certain something. But otherwise? Frustration and fake smiles for the lesser-moneyed and lesser-abled. Pah!

Maybe it’s time for a career change, Smiler. I’d advise that you don’t rely on Mr Businessman to get you out of this one.

A Polynesian education: hanging out with Heirami

‘I was wondering how you meet people whilst you’re travelling’, said my friend Alan. He’d been having a coffee in Papeete by himself and got thinking about solo travel, about how conversations start, about how the hell I end up having such random meetings and funny moments with total strangers. The truth is, I’m not totally sure how it works, but it just does. Meeting Heirami was no exception.

I’d hitched a catamaran ride over to Moorea, an island 17km west of Tahiti and done some basic exploration of the island before saying goodbye to my captain and crew. After such a special adventure, we’d grown close and it had reminded me of the solidarity and support of longer standing friendships and family life. It was pushing on towards the one year mark since I’d set off on my solo adventure and I realised that I craved some familiarity and comfort.

Because I was unwell. Again. Nasty tropical sores had given me a fever and sent infection down the length of my left leg. I couldn’t put any weight on it so planned bike rides and on foot exploration were a no go.

Instead I reluctantly tucked into another round of antibiotics and set up base in the simple yet affordable shacks of Camping Nelson, each day hobbling my way across a small patch of grass to the honeymoon sands of a picture perfect beach. 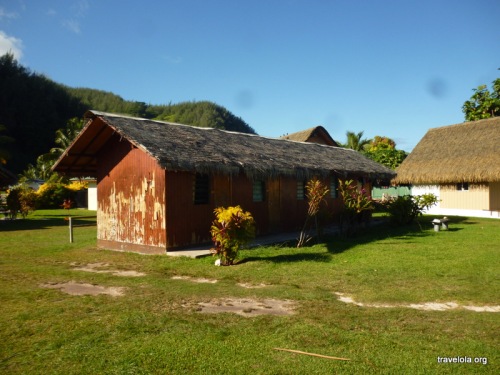 My room. My shack (mostly). My temporary home. 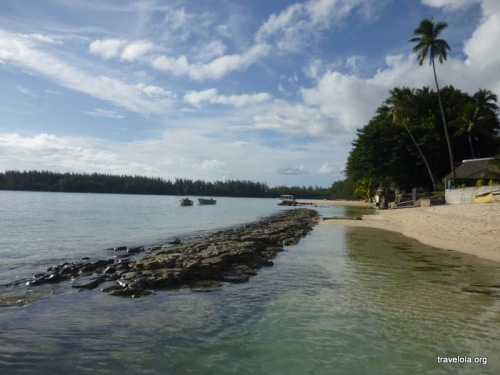 Down by the waterside

Which is where I met Heirami.

It was difficult not to notice Heirama, a smooth skinned, tribally tattooed guy with upright posture and a firm, naked bootie. A dancer at a nearby hotel, he walked confidently up and down the main stretch of the beach, stopping to splash around with families in the shallows, or to pick up a coconut, crack it open and offer it up to whoever was close-by and wanted to drink its water.

Which was me, on this occasion. And actually, after a few days of hermitting, I was craving some company. 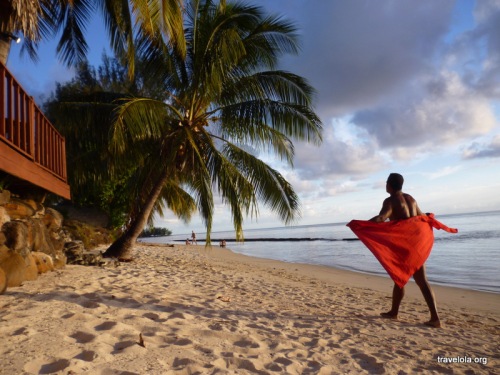 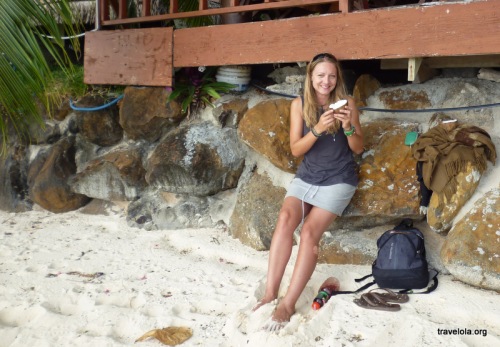 Crack the coconut… here you are… now get in a tourist pose… ready? 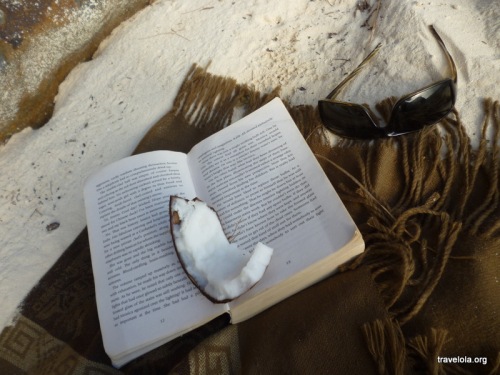 Book, sunglasses, blanket… and food. What else is needed? Basic needs met.

So I nibbled at the coconut flesh and listened to his lemon juice advice for my tropical sores. We sat in the bubbles of the ‘jacuzzi’ – a pooled area where the water rushes in and gurgles around – and he taught me Polynesian words and songs through call and response. I learnt about the different career choices of his siblings and about his journey from the Tuamotu islands to Moorea. 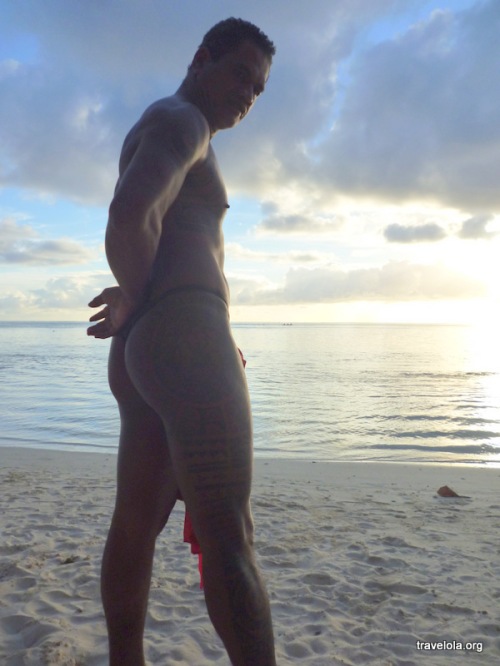 Showing me his tattoos up close (silhouetting doesn’t help!)

The sun started to set. ‘Pahari’ I said as I got up to leave that pretty little beach and Heirami, who was taking one last moment and still standing proud in his nakedness. ‘Pahari’, he said, sticking up his hand for some goodbye contact.

I left him there, silhouetted against a streaked peach sky.