It’s only after a half-hearted dip and slip down some slimy rocks at the northern end of Friendly Beaches that I read in a guidebook:

Tempting as it may be, it is advised that people do not swim. The water is perishing for much of the year and there are rips.

Water droplets sit on top of goosebumps. I haven’t even wet my hair.

D-man goes for the full submerge. ‘You’ll feel good. It’s not too cold once you’re in,’ he says. I try to recall that sticky heat feeling of our Wineglass Bay to Hazards Beach walk, but it’s no good. I can’t do it. I scoop up handfuls of chilly water and shriek and shiver with every torrent that I pour over myself.

It’s done. I’m not convinced that I’m clean, but I’m refreshed. I’m also a little envious of D-man’s submerge; I’d love to feel fresh-haired but I just can’t bring myself to jump in.

Back at camp, wrapped in down jackets, we set up the camping chairs in a sunny spot at the back of our van, and we sip local Pinot Noir and slip lemon juiced oysters out of their shells. A wallaby nibbles on the bush some three metres away, occasionally looking up at us.

Other than the wallaby, we’re alone. Anyone staying the night at this part of the Freycinet National Park has pitched up and retreated to their own little camping coves.

The wind blows my towel off its makeshift hanger for the second time, earlier warnings of an impending storm showing signs of an imminent arrival in a sky top heavy with grey.

Time, then, for one last beach stroll before retreating to the comforts of a camper van.

And time to put away the guidebook. Too late to start caring about warnings at this stage.

What’s your experience of camping in Tasmania? I’d love to hear your thoughts and recommendations. 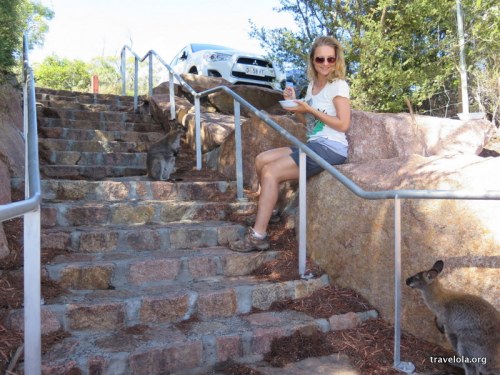 Wordless Wednesday #18: The Tallest Hardwood Trees in the World

The need for solo time and travel

What to do when solo travel stops being solo travel? When it becomes group travel? Or couple travel? Maybe the adventures are enriched by shared experiences, maybe the chatter and laughter rolls on late into the night, maybe great plans for the next day are derived around a camp fire or hostel kitchen table.

But maybe something inside of you yearns to sail your own ship again, to break free of noise, to just be yourself by yourself.

It happened to me.

A little over a year ago I was bussing from Brazil to Bolivia, practising Spanish with people in the street, dancing with crowds at random festivals, eating birthday cake with local families and following Che Guevara’s final footsteps. Sure, at times I was mingling with others, but so much of my days were spent and decisions made on a solo basis.

Sometimes I was lonely but mostly I was open to meeting whatever people and adventures presented themselves. My heart and mind were open to the world, to life.

Fast forward to March 2013 and I was employed, in a relationship and had signed a 12 month lease on a town house. A desire to be part of something and to belong took over. And whilst my heart felt other joys, my world closed in. Just a little bit.

And so when all sorts of things built up into a crazy head spin, I followed the scent of my traveller blood and did what made me feel real and alive, and I walked out of my share house, into the houses and onto the couches of friends and soon to be friends.

But what about the solo stuff? Not being on anyone else’s schedule? Not having to be considerate of anyone else for a moment? If I was to get back to a place of generosity and warm spirit, I needed a moment of quiet and a moment of selfishness.

The instant that I booked a tipi nearby one of my favourite beaches within a National Park barely an hour away from my Aussie life, I felt my spirits lift. Adventure. Nature. The ocean. My tick tock.

And now I find myself at the end of a week of small time adventuring feeling almost ready to return to the cosiness and rhythm of settled life.

Just one more night, alone, before I rejoin the party.

Travel, I realise, doesn’t have to be about far away places and exotic appeal. It’s about tapping into that feeling of exploration and freedom, and keeping it local can work just as well. 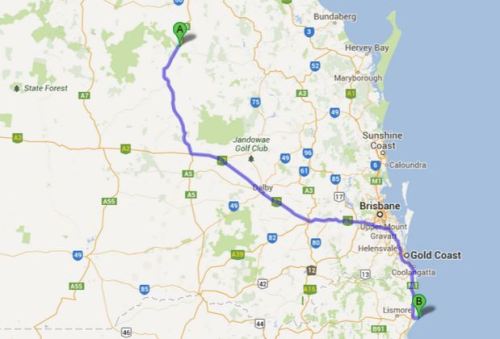 There was no sign of the boys when I awoke.

The sun was shining light on another blue sky day and I saw that we’d pitched the tents on dusty, rocky road, the route into the Isla Gorge lookout. As with many of the Queensland National Parks that we’d stopped off at in the last two weeks there was an undercover area and a seated long drop, fairly recently completed, it would seem.

I heard voices. The boys had returned.

‘The views are amazing’, said D-man, pointing me in the direction of the lookout. Breath hung in the still morning air.

I took the camera and went for an early morning wander, past the lookout, along a pathway that seemed to lead to a forever that was tempting me on and on.  I didn’t have any water. I was wearing flip-flops. I had no phone (and no reception had I even had a phone in my possession). In Australia, a land full of snakes and spiders and sun that can kill, I disappointingly had to be measured. Boring and responsible. I headed back to camp, away from a precipice walk and vast views across a gaping gorge. 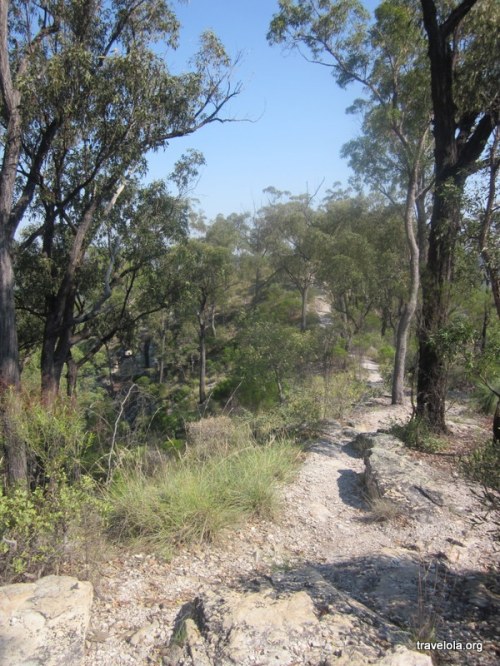 And the path goes on…

Back on the road we cut through rocky hillsides and rolling landscapes dotted with tall, lightly canopied trees and past trucks pulling trailers of oversized tires until we arrived in Taroom, where we pleasantly breakfasted at BJ Coffee Shop before starting the journey reenergised and suitably caffeinated.

But I was drained, and whilst I hate to admit that I missed out on moments of Australian countryside splendour, I happily spent the next section of the journey dropping in and out of a light sleep. Maybe I was sensing the end of this trip – this travel adventure – and my mind was digesting the sights and sounds of the last ten days? Chinchilla and Dalby, with their farm machinery and posh utes did little to deter me from dozing some more, and my response to the sign stating Watch for 36 metre road trains was simply (and unusually) a shrug of fate acceptance.

It was unfortunate timing, but by the time I was awake and chatty and ready to observe the changing scenery we seemed to have arrived into a monotony of recently flooded farm land and continuous roadworks. So far, this inland route through Queensland had been full of well-maintained roads cutting across a quiet and striking isolation, but between Waru and Dalby we inched along past yet more empty fields to the tune of road repair trucks and the whir of a struggling air conditioning system. It wasn’t a moment for travel awe.

Thank goodness, then, for walkie talkies, a boy gadget that D-man had gleefully bought for our Eclipse 2012 festival excursion which now proved to have other purposes: to provide entertainment and speed on our journey. At a stop sign we looked towards another sign and then switched our walkie talkies to Channel 78.

‘We’ve got a white Mazda at the north end, happy to authorise access? Over.’ We tested.

‘Come on through. Over.’

It worked, which was somewhat unfortunate for those labourers because for the next few hours we probably caused all sorts of innocent chaos and confusion.  We immersed ourselves in local road building culture. We asked questions about progress and demanded timescales. We waved at the authorising workmen and thanked them, via walkie talkie, as we drove on by. We should have (maybe) known better and behaved far more maturely but time on the road can do funny things to your attitude and behaviour so that you end up doing things you might never do back when you had a responsible job and a mortgage and were functioning in a society of consideration.

Ah, cut us some slack. No one was hurt.

And so, with some mischief and a raft of memories from our Queensland road trip, we arrived back to New South Wales, homeward bound for Ballina. Just like that, it was over. 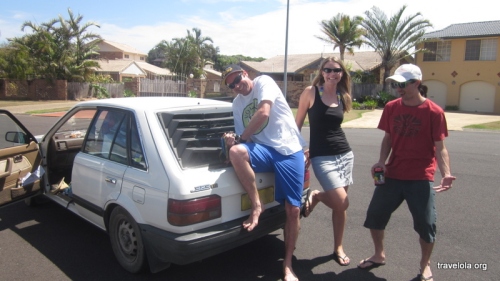 Squashed down and ready to roll… for a 4,000km+ round trip

Nerrell, our 1984 Mazda 323, looked good to burst; even a sturdy bum slam onto the boot struggled to keep her closed at the seams. Water, snacks, a tent, a tarp ready for some shade in far North Queensland, an outback first aid kid, two feather pillows, a bulky tool kit, parasols and two lightsabers.

What were we thinking?

I mean food and drink, all good, but it made me wonder: with knees to chins at the start of this mission, would the early smiles and whoops soon dissipate into a thick air of frustration, the three of us sworn enemies before the initial 2,397km leg up past Cairns was even complete?

And no map. Seriously. We did have a National Park camping book, balanced on top of the picnic basket, but other than that just a Cairns Google Maps print out shoved somewhere beneath the front passenger seat. It would be a while until we needed that print out, no need to worry. Hours of driving and discovery ahead.

And with one main road up the north east coast of Australia, how hard could it be to navigate?

It was Wednesday 7th November 2012, I’d finished work midday and quickly packed up too many socks and undies and heavy tops. Squished into the car, we set off, three friends on an Aussie adventure, heads filled with bubbly lightness brought on by  the promise of two weeks of freedom and adventuring up ahead.