I’m not overly enamoured with traipsing around ruins and have thus far passed up on visiting some places along my route through Ecuador and Peru. I had wondered, for instance, about Chan Chan, but was reassured when another traveller told me that ‘the photos are great, they show it at its best, but when you’re actually there its just a bit boring… and shortlived‘.

Machu Picchu is, however, a whole different thing: famous, revered, a place of intrigue and cultural and historical interest. And if its good enough for Mick Jagger, who bought up all the tickets for the morning session a few weeks back, well, then it’s more than good enough for me.

I, along with over half the group, took the bus up to Machu Picchu. Tired and worn down, the 05:00am start was a significant effort. Rain swept the bus windows as we took the winding road up into a lush mountainscape, and I wondered how the others were getting on climbing the many, many steps in these miserable conditions.

We all met up by the entrance. They were soaked through but pumped up, physical challenge completed.

We all headed into the Parque Arqueologico Nacional Machu Picchu, and through misty, mystical wafts of cloud we saw those infamous views, the site of Machu Picchu spread out beneath us; quiet, green, impressive. A moment to be still and breathe and take in the wonder. 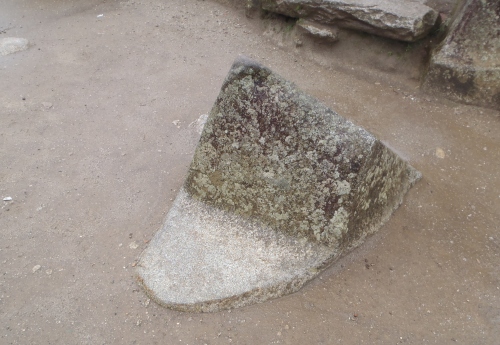 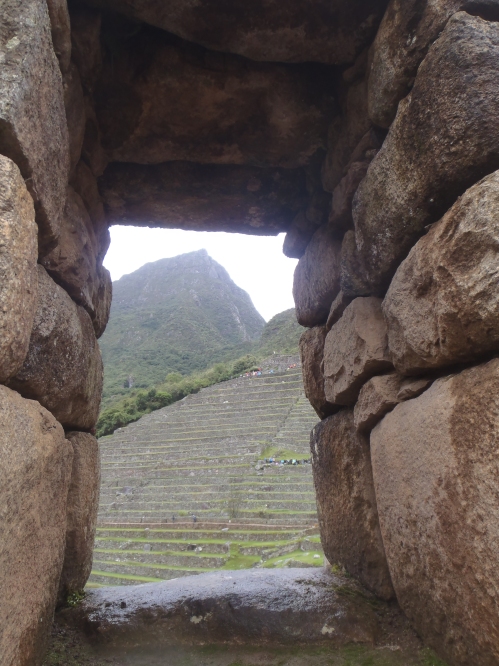 Every day at the Parque Arqueologico Nacional Machu Picchu there are only 400 passes available for those who wish to go to the summit of Huayna Picchu, a one hour climb up from the city ruins. I would recommend spending the additional $10 for this privilege. With two available entry times of 7am and 10am, I was in the second group, queuing just as the strong sun broke through, meaning that once I reached the top, all morning mistiness had been burnt off and the views over the Machu Picchu site were wide reaching and breath taking. I imagined that for the earlier group it must have been a more awkward climb with wet, slippery steps and less of a spectacularly clear climax.

Parts of the climb were difficult and steep and cables bolted into the wall were useful to support or launch yourself up to the next level. One young woman stood crying about half way up, her husband trying to persuade her to continue. The sign by the entrance had stated: This climb is for the fit and healthy only.

A little cave section near the top meant a fun squeeze and duck through chunky rocks before emerging back out into the sunlight, and the actual summit itself was a scattering of boulders inhabited by happy, puffed out people.

Made it! Views down over Machu Picchu from Huayna Picchu

And after Machu Picchu and Huayna Picchu and the whole spectacular jungle trek with all its funny, sometimes scary experiences, we finally departed Aguas Calientes aboard the PERURAIL train heading for Ollantaytambo. A high roofed, comfortable and smooth train with complimentary peanuts and mate de coca and tables for every seat, this felt like a luxury ending to an amazing few days. The feelings of exhaustion kicked in as many passengers on board nodded off, only to arrive to chaos in Ollantaytambo for the final bus ride back to Cusco.

Memories and moments that will live with me forever. What a trip.

It was 5:50am and my alarm was buzzing and I didn’t want to get up. I had arrived in to Huaraz a couple of days earlier and had planned to do a one day test hike – the Churup trek – to see some of the area and to assess how I dealt with the altitude. But now my alarm wasn’t shutting up and I’d had a bad night and I was finding reasons to talk myself out of going. I could do it another day. What was the rush? But I did get up, and I’m glad that I did.

Getting to the starting point

It was bright morning. The distant razor ridges covered in a smooth, snowy blanket stood out vividly against a brilliant blue sky. A taxi to Pitec cost S/.40 for a fifty minute ride up rocky, unrefined roads and narrow passes through villages. The jolty ride rattled the taxi interior, and my teeth rattled in my head.

The early morning sun was streaking through the trees as the taxi driver skilfully dodged other vehicles and avoided steep drops. Donkeys blocked the road and dogs ran along with the car, barking madly. A man sitting in a field waved as we passed by another village of low mud brick buildings with red tiled roofs where another man led three sheep on a lead and carried a cockerel under his other arm.

Thirsty shrubs and trees and parched grasses decorated the landscape, the overall colour scheme yellow, orange and brown. The landscape started to open up to reveal far reaching views and rolling hills and mountains, a coarse landscape with fewer trees, tufts of spiky grasses and the odd hardy shrub and chunky rocks. We had arrived!

It was a confident start: a definite pathway and a point in the right direction from the ranger who had taken our details and a S/. 5 entry to the reserve. Within a few moments the path sprawled into a multitude of possibilities.

‘It’s really obvious and easy to see’, another traveller, Raz, had said when we had discussed it yesterday. Really? We made a choice. It was the wrong one. Pathways disappeared and then possible pathways reappeared. We pushed on, not wanting to backtrack. And then finally, after two hours of scrambling over rocks and pushing bushes to the side, Pacha Mama guided us and we saw her, and she was beautiful. A proper, well-trodden path. Amazing.

Spirits lifted, we pushed on, but steep climbs and increasing altitude meant that every ten to twenty metres we had stop to catch our breath. I felt dizzy. I had a serious case of the sniffles and my head hurt. I popped some paracetomol.

A gentle downhill stretch passed a more rocky landscape brought some respite, winding slowly down to a waterfall that split and then trickled over boulders into a little pond. It was to be our picnic spot. And it was where we were overtaken by a group of fit, acclimatised Peruvians, who stopped for a quick chat and then marched onwards.

The path took us to the left of the waterfall and put my limited climbing experience to the test with an unavoidable ascent passed patches of snow. Although there were plenty of footholds and ledges to grab, the drop was steep. I didn’t look down. Grabbing thick wires bolted into the rock face and launching up to the next flatter section reminded me a bit of via ferrata that I had done a few years back. I wished I had brought a carabiner. The drop down would have been horrific: no helmet, no first aid kit, no way of calling for help.

A further ten minutes on from the climb and I arrived at Laguna Churup (4,450m). Finally, a destination success! And wow! Cliffs on the far side rising straight from the lake that sparkled in the sunshine, the bottom visible with black and turquoise and yellow patches, the water icy cold from the snow run-off of Mount Churup in the near distance. A stiff breeze rippled the surface, the lapping water on the mighty boulder peninsulas and the distant rush of the waterfall the only audible sounds.

Re-energised, the way back felt like something out of an action-adventure film: swinging from branches, sliding down rock faces and running and bouncing along like a mountain goat

Um, okay, I can’t think of any action-adventure films with goats and I really wasn’t that agile, managing to lightly sprain both ankles on the way down.

We took the right path all the way back. Phew.

If you do this day trek then – if you want to do the regular, less adrenaline filled and random route – take the path to the left and up once you’ve paid the ranger, and not the tempting one to the right. Or take the one to the right and enjoy an unmapped scramble and ramble. Why not?!

Bouncing along in a shared taxi-minibus (S/.8) the 3:00pm rain accompanies us on our journey back to Huaraz. The collectivo bursts a tyre and we sit on the roadside whilst the driver changes the wheel. We continue onwards and a young girl waves from the field as we drive by and I wave back. And we smile and wave at each other. I think about the altitude, about getting lost, about the walk in general: it was tough for the body, but good for the soul. I feel great.