Keeping it cheap in Cairns

Because despite a glitzy facelift of the esplanade area, Cairns hasn’t risen to big city status and gone down the ‘we’re-so-good-we’ll-rip-you-off’ route. At least from what I could tell.

Cairns doesn’t seem to be an overly exciting place, with it’s a grid system of functionality, trimmed and watered grasses and all the anticipated visuals of palm city tropics. Before you shoot me for such a low impact first impression report, know that I’m not a city fan. It takes me to know a city to love a city. More on that later. But Cairns, well, on first impressions it seemed pleasant. Surprisingly so.

All I really knew of Cairns – previous to this short exposure – was that it happens to be where many people set off on Great Barrier Reef adventures.

L-man, D-man and me were on a different kind of adventure, a road trip drive-by exploration that had already seen us cover some 2,000km from Ballina in New South Wales. Our destination was the Eclipse 2012 festival, a few hours inland from Cairns, our food was cheap camping cook-ups and our accommodation a couple of mismatched tents.

But on our first night in Cairns we called a friend and crashed his family holiday. So strong was the call of a shower and a social.

‘If we get caught’, he said as we skulked down the side of the holiday apartment building, ‘you guys are gonna have to pay up’. 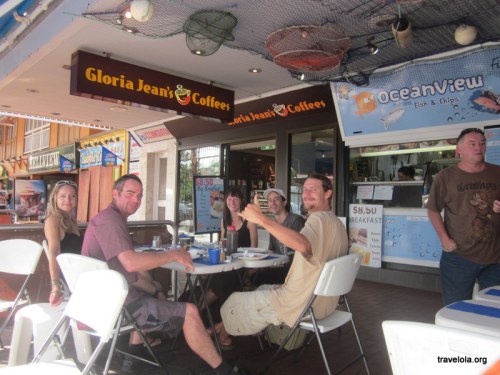 $8.50 breakfast + a proper coffee from next door = sorted stowaways

The next morning we breakfasted with two other stowaways at a hole in the wall offering $8.50 big breakfasts before wandering around the free public pool on the ocean’s edge. Ah, the irony. All that salty water so close, a forbidden territory of jellyfish deadliness, and you have to make do with a man-made structure and a dose of chlorine. But at least there is a man-made structure, I guess. The heat of the day was rising and even a paddle in the shallows of the pool brought some cool-down comfort. 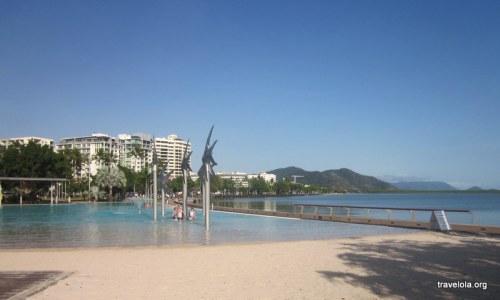 Lagoon on the ocean’s edge 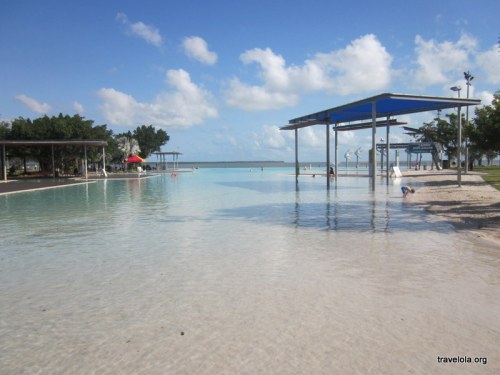 Before leaving the pool area I noticed a sign and I realised that if I didn’t dislike organised aerobics quite so much, Cairns would be a great place to live. Here in the park, every day, were free fitness sessions. No ‘I’m too poor’ excuses for anyone. Aussies and their mission to stay on top of health and fitness, bold and in full colour. Gotta love it. Or at least appreciate the intention. 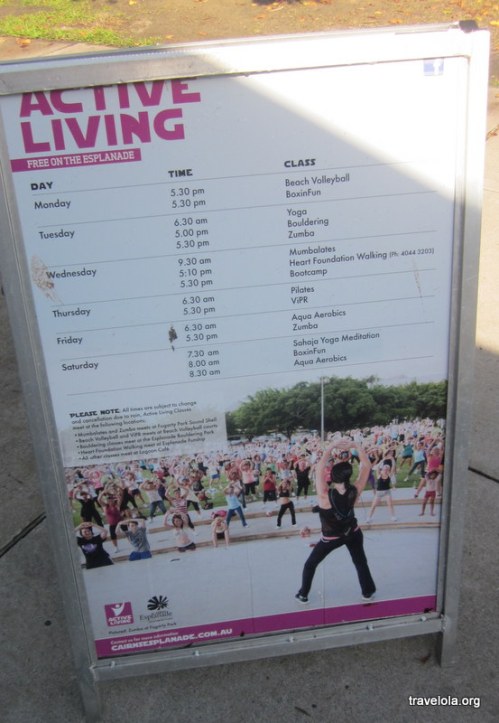 So what were the tricks to keeping Cairns cheap? Dishonesty in terms of accommodation, grease in terms of nutrition, killer chemical in terms of health and fitness and keeping cool.

More realistically, though, we barely spent any time in Cairns – half a day – so of course it was easy to keep it cheap in this compact city centre.

Why this blog post focused on budget, who knows? The main thing I realised is that I like Cairns enough to go back, maybe to spend some time exploring it’s surface normality a little deeper (whilst not doing zumba classes). It was that kind of place, and it surprised me.

4 responses to “Keeping it cheap in Cairns”