Even sharks can’t spoil my bliss 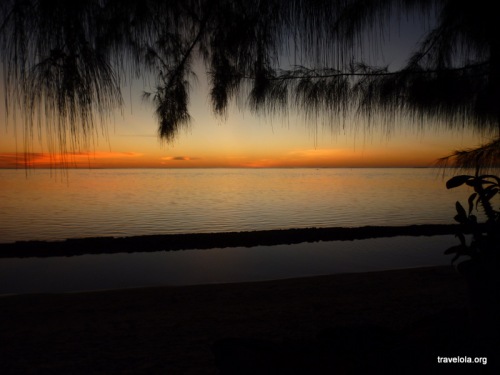 Watching the sun set… just before…

On my last night on the island of Moorea I sat on the beach barely 30 metres from my shack, dug my toes into fine sand and watched the sun set the sky alight.

I sat for a while and thought about all sorts, and I felt calm and content. The power of nature.

The globe disappeared and I got up to leave, but something stopped me, maybe a greedy goblin who wanted more of that blissed out contentment. So I took another seat on a bench – a higher viewing platform – and gazed out at the horizon flooded with pink, yellow and red.

And then I spotted them: two fins close in the shallows, separated from the shore only by a little strip of water and a slither of rocks. I looked around me. Two English girls sat chatting at the picnic table a few metres away whilst a Swiss mum showered sand off her two-year old son. No one said a thing. Had I imagined it?

I kept watching and sure enough, they surfaced again. ‘Sharks? Are they sharks?’ I asked no-one and everyone. The girls ran down to the water edge, fancy cameras to the ready. The Swiss woman shouted for her husband.

‘Well spotted’, said one of the girls as they bounced back up to the campsite. I was glad I’d said something, but, if I dare admit, the selfish part of me was secretly smug for having had a few uninterrupted moments to just take it in.