Sampling the sounds at sea 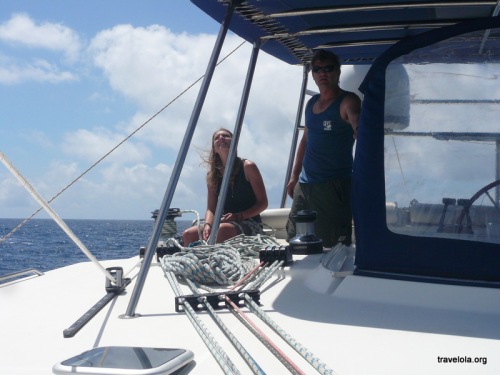 20th Century American writer, Henry Beston, once said that ‘the three great elemental sounds in nature are the sound of rain, the sound of wind in a primeval wood, and the sound of outer ocean on a beach.’

But what about getting away from the beach and actually being out in the outer ocean? Maybe he never had the opportunity to check out the sounds associated with sailing across the vast South Pacific Sea. During my three-week journey from Galapagos to Tahiti I certainly had the time to get familiar with the noises of the middle of nowhere.

Back sometime in the reign of the Romans, poet Virgil uttered that ‘every sound alarms’. Totatlly out of context, I hear him on a literal level, because although this quote is more usually linked to discussions of guilty conscience and such like, sounds – and unknown sounds in particular – seem to put me on high alert.

The creaks and thuds and squeaks of the boom as the wind grabs the mainsail and rattles her about were initially unsettling, but now I tune out, to some extent. Below deck clunks and bashes as waves whack the bottom of the boat are sometimes so strong that they physically jump me in my bed and send a shock through my body. These sounds, in forte, are so linked to motion that their impact is accentuated. I feel each thing that I hear. Their sound is fully imprinted.

Gentler overtones include the flutter and ripple of the sail when the wind blows a different directional gust, whilst the whoosh of water rushing out of the back of the boat gives a sense of momentum and is the constant soundtrack to our voyage. It’s too light a sound to be the baseline but it’s there, always; a practised concerto with a limited melody.

Bursts of laughter and conversation colour the piece and add a choral element, whilst the daily generator eruption provides some guttural oomph. Indoor fans and the random hum of the sumps in action add some sound fuzz and grate and purr to the score.  We need some electronics in there. Let’s make this rich and big and keep it real. This isn’t a fairytale with a twinkly, tinkly track list.

In some respects our boat and time at sea are part of an expressionist orchestral piece, dissonant yet full of life. And we’re not talking vivace here, please, this is a sailing overture created by the universe, our great conductor, our maestro, and the tempo is far more lento than we’d like at times. Lento yet full of awkward dissonance; gentle with some heart tightening explosions.

As I conclude this post, I think back to Beston’s comments and realise that the sounds I’ve experienced out at sea are the result of interactions between humankind and nature, and not just elemental forces working alone. In terms of elemental forces out at sea, the sound of night-time silence has to be the strongest, a loud sound accompanied by a full, sparkling sky.

But no! Of course, that silence isn’t true! I’ve obviously tuned out the gentle water rush as we slice through the sea, onwards to French Polynesia and the upcoming reality of real life. The tricks of sound and of the mind. Who knows any more what is actual or imagined out here. Does it even matter?

6 responses to “Sampling the sounds at sea”