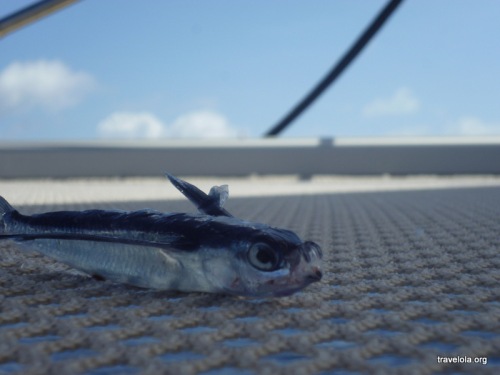 Before I left Puerto Ayora in Galapagos, I’d had a goodbye chat with my parents. At least three weeks without contact was going to be a real challenge for them but they knew that once I set my mind on something, there was little point in trying to persuade otherwise.

I’d been gone nearly a year during which time I’d backpacked solo through parts of New Zealand, Australia, Ecuador, Peru, Brazil and Bolivia, coming in contact with some challenging situations but always having some sensibility and a lot of luck on my side. As a result, my family were somewhat assured that I wouldn’t do something totally stupid, even if they struggled to understand why I had to sail across a vast ocean with a some strangers instead of choosing a more regular, safe option and route.

My mother, however, refused to let her worries burden me.

I hadn’t really considered what sea life might make an appearance during the 3,ooo mile voyage, although I hoped we’d sail with some dolphins and maybe some sharks. And flying fish? Did they really exist? I racked my brains trying to recall any of the ocean nature programmes I might have watched over the years. Nah. Nothing.

As it turns out, flying fish do exist. On my second day at sea I stood out on deck and watched a shoal fly through the air, a flash of unified silver splintering off as each little fishy particle dived into oncoming waves. Another school jumped out of the water and soared across the sea surface before pelting back into the depths. I ran inside.

‘I’ve just seen a load of flying fish!’ I told Alan, my skipper, ‘Loads of them’.

He looked up from his book. ‘Yeah? There have been a lot about’.  My novice excitement contrasted with his nonchalant response. This world was his world – his  familiarity – where flying fish were part of a more routine picture.

For me, though,  this new world of ocean and rocking, of starry nights and short sleeps, of flying fish and squelchy squid visitors, it was enough to flick a childhood switch inside my brain and set alight some intrigue.

Over the next few days I didn’t just marvel at the sychronised schools of flying fish, but I got up close and personal with all sorts of slippery, salty and strange creatures. I was fascinated by their alien forms, their determination to get on board our catamaran and their night-time pranks (not all so wonderful, I must add).

So during some downtime I got creative and wrote a few articles, one of which is soon to be published and another that I will share here. Enjoy.

You can also access the article Sea life suicide and the squid who would be captain through the Articles tab on the main menu.

3 responses to “So, flying fish and suicidal squid actually exist?”