Journey into the strangest landscapes

I was on a trip out to Los Tuneles and typically I had failed to do any research other than listening in on a couple of travellers debrief the outing. I knew, then, that it involved tunnels and snorkelling in waters with a selection of our sea life friends And I heard sharks were involved. I was both strangely drawn in and totally terrified.

So I set off with expectations of big, fat tunnels where we’d sail into the depth of darkness and take to the water, and splash and snorkel around in a flash-lit womb. I guess I was thinking about caves, or maybe I still had the tunnel experience at El Chato at the forefront of my mind.

Instead, we motored along south from Puerto Vilamil on the island of Isabela, Galapagos for forty minutes until we reached a splattering of mini lava islands. Nazca and blue footed-boobies sat king-of-the-castle on top of black, chunky rocks as we wound our way further into a thickening maze. 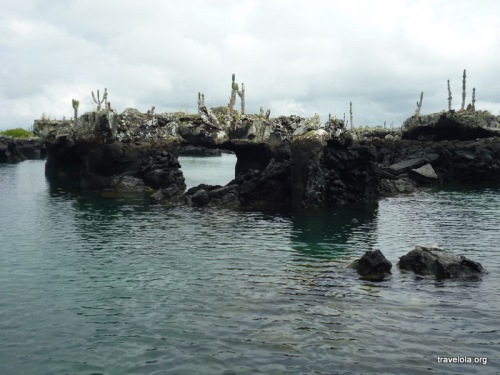 The skipper manoeuvred through narrow passes and shallow spots, finally dropping anchor in a more sheltered lagoon. Here was a network of lava archways and strips that joined islands into a bigger formation. Cacti and a few piles of rockiness gave some height to this floating land.

Moored up in an alien landscape

‘Give me your camera’, said a French tourist. On our way out to Los Tuneles we’d picked him and his family up from a yacht moored a little off Isabela. ‘Come, I take a photo of you here’. I posed awkwardly and then went off on a little solo wander. It was crunchy underfoot and I nearly lost my grip. But no! If you’re going to fall, don’t grab out! There is nothing to hold on to apart from cacti.

I sat on the edge of an archway and looked into one of the lagoons. Here, the water was less rippled and the sun pierced right through to the bottom. A sea-lion swam along, hitting the surface and then diving down again. A turtle glided past, a little beneath the surface. Another woman joined me and shouted over to the others, but the show continued only for a little while longer. 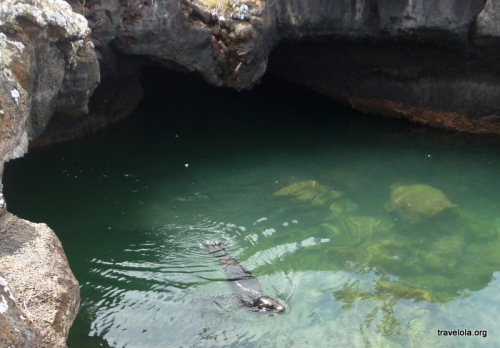 Within fifteen minutes we clambered back on board our little boat. As we headed away from the main bulk of lava mass we passed by some penguins and pulled over for a closer look. It wasn’t long before they leapt into the sea. You humans are all the same! Such voyeurs! Can’t a penguin socialise without you guys hanging around like a bad smell? 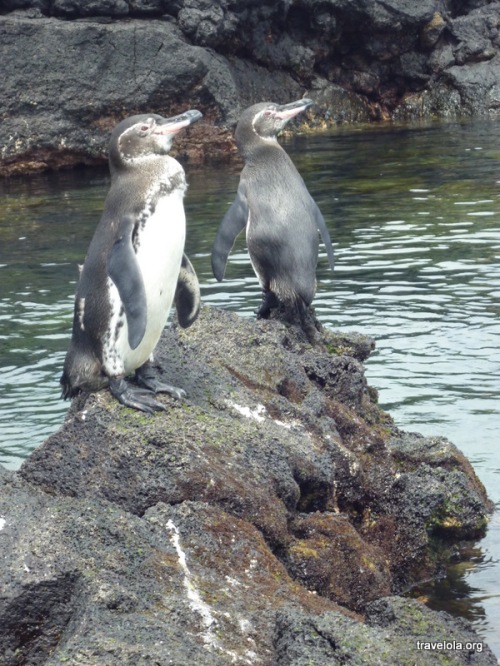 Pose? Nah, let’s get out of here

And what about the snorkelling? Ah, yeah. It turns out that the snorkelling was to come later and was totally separate to the tunnels or archways or whatever you want to call them. Someone mentioned something about swimming and snorkelling not being allowed in Los Tuneles anymore. What was I thinking? Silly me.

I paid $60 for the tour through Tropical Adventures in Puerto Vilamil.  The tour included a trip out to Los Tuneles, a basic pack lunch and snorkeling in another spot in the afternoon.

8 responses to “Journey into the strangest landscapes”