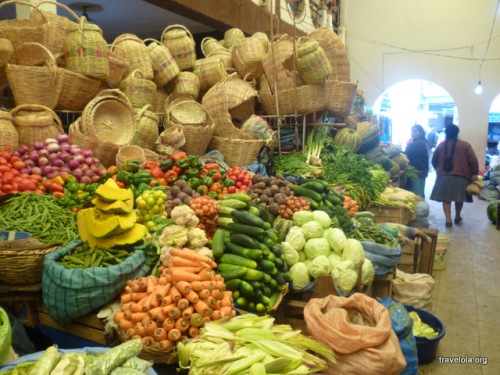 Fruit and veg at the Mercado Central, Sucre

Dinosaurs and karaoke aside, Sucre has a more worthy sight worth visiting: the central market. Over and over I lost myself in a wander through mazes of stalls, feasting my eyes on colourful stacks of fruit and vegetables, cakes and candies, spices and sauces.

I chatted to a couple of Dutch travellers who said that back home they rarely go to the market but here in South America they can’t stay away, and I thought, yep, it’s the same for me. So what’s that all about?

The alternative to the markets are the supermarkets, of which there are two close to the centre of town. Compared to European standards, these supermarkets are teeny and they are fairly well hidden and under populated. The one time that I visited the ‘big’ one I was surprised to find a somewhat under stocked ghost shop. A total contrast to the usual supermarket experience.

‘The rich people shop in the supermarket’, my Spanish teacher told me, ‘they don’t tend to buy at the actual market.’ ‘But the food is so good there’, I argued. I didn’t get it.

Realistically, though, I did get it: it is about convenience and excuses.

Back in my old existence, life was full. Independent sellers had closed by the time I wound up working for the day. Fruit and veg, meat and fish, all the things that are better fresh from a proper, local source, I bought these in the supermarket on my way home. Weekends would have been the time to go to the markets and to visit these specialist shops but those two precious days off? – I couldn’t bear to give them – or a single moment of them – over to shopping. So it was a choice. Possibly, a pretty bad choice.

Because since travelling in South America, I have discovered the joys of the markets: the bustle, the colour, the fusion of smells, the scurry of crowds, the sale songs. Hacked up animal parts and snouts might not do much for me, but the fresh fruit juices and simple, cheap meals quickly became favourites of mine. 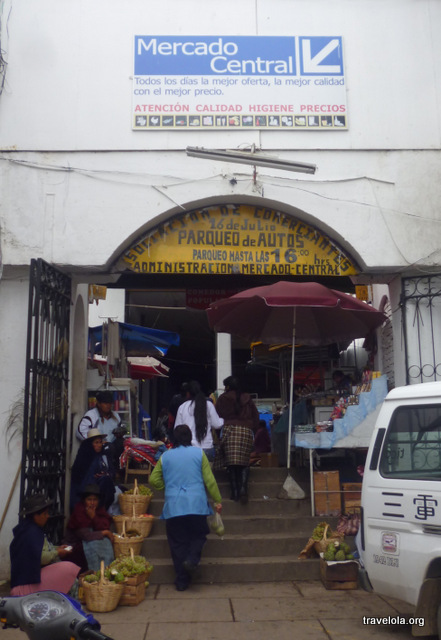 One of many entrances to Mercado Central 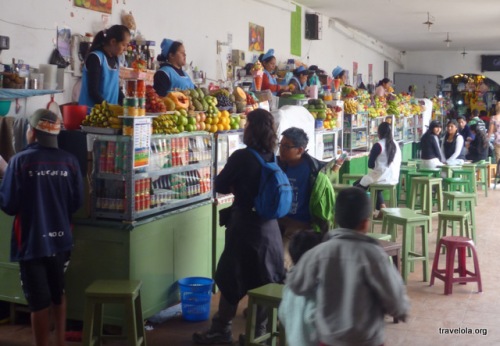 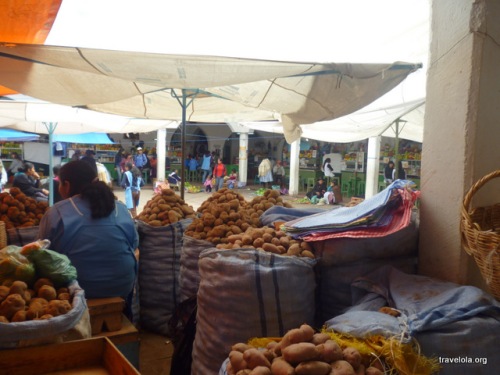 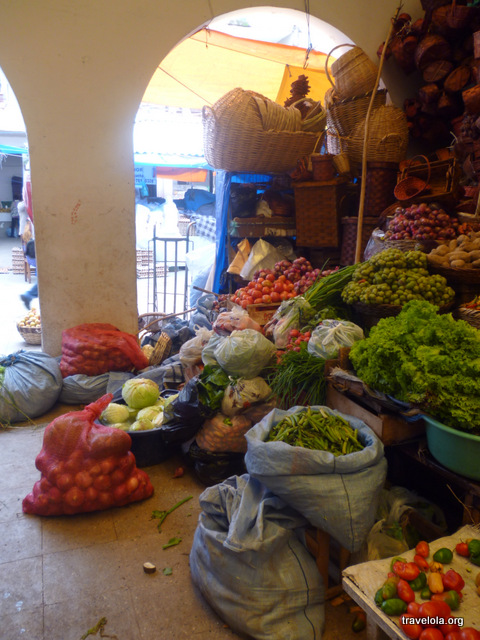 Best place to stock up on veggies 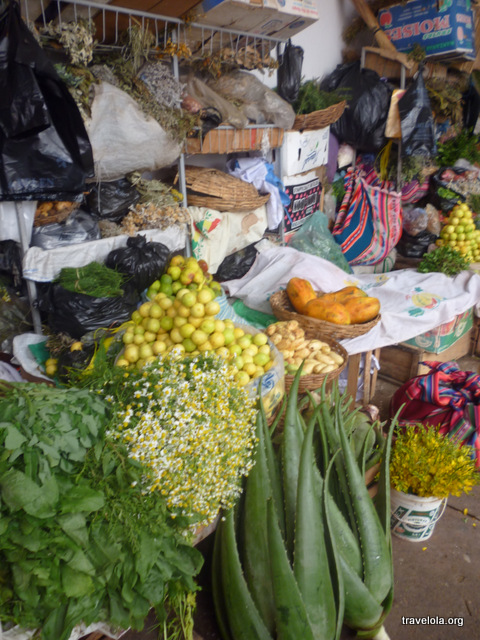 Cow snout and tongue, anyone?

It became a habit, then, that each time I arrived into a new town I had to go check out the main market. And quickly.

After my friend Max introduced me to buñelos, trojori and api, I made it a habit to breakfast upstairs in the market during my three week stay in Sucre, building rapport with the vendor and introducing other backpackers to the magic and busyness of the local way to start the day.

I quickly discovered that I preferred to drink trojori (or api blanco) over api morado, it’s thick, sweet, yellow warmth with chunks of softened corn giving me energy for the day. I heard that trojori is loaded full of nutrients and is often given to breastfeeding infants when their mothers can’t produce enough milk. Having been through the mill with continuous illness where my diet consisted predominantly of antibiotics, it felt good to give my body something wholesome and rich and warming.

And buñelos! Ah! What can I say? An indulgent doughnut style pastry over which you could choose to either sprinkle icing sugar powder or drizzle syrup. Granted, a little greasy and not particularly healthy but everyone, from businessmen having a quick bite before work to street children looking for a hand out, joined in the enjoyment of these treats.

So… if you’re ever over South America way, don’t get scared off by the worry of chaos and hygiene in the marketplace. Instead, wind your way through the colourful stalls, sit yourself down in amongst locals and order up a home-cooked dish. You may well not know what you’re actually eating but that’s all part of the fun, right?!