Can I stomach the stench of Rotorua?

How do you choose where to go when travelling? Interests, hobbies, archaeological and geographical wonders? As I’m travelling through New Zealand without a guide-book, I’ve been relying on local information and recommendations. So far it’s worked out well. Going to Rotorua was not a decision based to the volcanic activity of White Island or for the alleged health benefits of the many naturally heated spas and baths of the area; it was simply recommended as  a nice stop off on my way down to visit friends in New Plymouth. But I was warned: it was a stinky place, sulphur fumes from hot muddy pools perfuming the air.

I arrived into Rotorua in the Bay of Plenty region of New Zealand late afternoon. It had been a drizzly journey down from Auckland through rich, green countryside; acres of flat farmland and forests with rolling hills in the far distance.

The bus skirted the industrial outskirts of the city. I was surprised at the size of the place: I had expected a quaint, little place yet here were all the usual city trappings of McDonalds and Subway and KFC. I held back judgement. Thick white puffs rose into the damp sky and the little kid in front of me exclaimed: ‘Look mummy! Steam!’ My ex’s voice rang loud in my ears: ‘It’s not steam, you can’t see steam!’ but I bit my tongue. No need to say a thing.

It was only a five-minute walk from the bus stop to my CouchSurf where I dropped down my bags and got ready to do some exploring. My host, Susanne, pointed me in the direction of the waterfront, a ten minute stroll from the city centre through the museum gardens full of flowers and statues and clipped lawns, and alongside the stinking heat and scalding temperatures of the Whangapipiro pool (also known as Rachel’s Pool after ‘Madam Rachel, a notorious English cosmetician who promised youthful complexions because of the softening effect of silica water on the skin’). 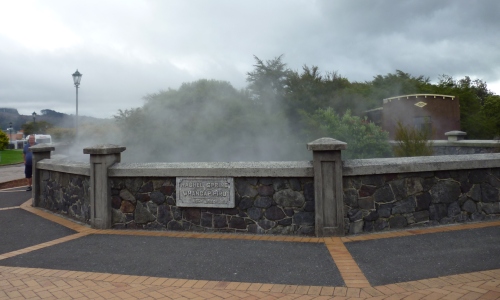 The lakefront itself was a bit wild, wet and windy, but a few people were out and about and ignoring requests not to feed the birds. Black swans paddled around in the water that lapped in over the pavement, and sea planes lifted off of the greyness of Lake Rotorua. 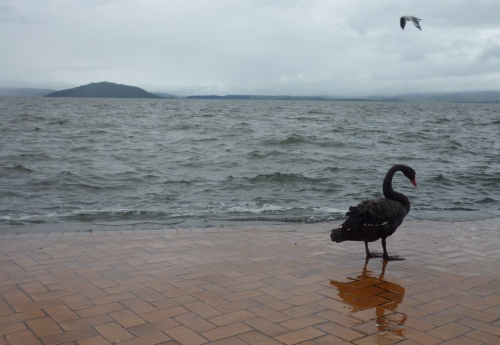 The following day brought with it the promise of better weather so I stepped into my walking shoes and jumped on the No. 3 bus to Long Mile Road and the impressive forest of redwood trees. The afternoon was spent exploring more of Rotorua itself.

Rotorua, with its population of about 70,000 is a small city. The streets feel spacious and shrubbery is dotted around all over the place. Crossing a road isn’t a problem at all, big gaps in the gentle flow of traffic. Rotorua has been voted New Zealand’s most beautiful city on six occasions, and if you are able to ignore the sulphuric smell and taste of many a breath that you take, then yes, it’s a lovely, lovely place.

I went and had a chat with Pa outside the Rotorua Arts Village (RAVE) where he was carving bone combs and other decorative trinkets. ‘I can’t afford whale bone’, he laughed when I asked him what bone he was working with, ‘This is just beef bone’. He told me about the Treaty of Waitangi and the British-New Zealand connection, and the ongoing fight to have the treaty declarations honoured. And he recommended Te Hira Toi – Ta Moko Studio when I asked him about Maori tattooing. ‘They’re family. Tell them I sent you’.

In the centre, the main street of Tutanekai Street is crowded with souvenir shops, cafés, clothing shops and a bundle of traditional craft places. ‘Quite a few shops have moved into the new mall’, said Susanne, but it didn’t feel too dire, – there still seemed to be life on the streets and a welcome absence of boarded up buildings.

Outside the info and events hub of City Focus under the rain/sun protection of a stylised covering, handfuls of young people sit tapping on laptops and smart phones making use of a free Wi-Fi hotspot, courtesy of KapuaNET. Music plays between 8:00am and 5:00pm and one day I found myself listening to lovesick slush and being serenaded by a high (on life?) guy when everyone else was having their breakfasts. You can’t pick your playlist and it was a slightly sickly way to start the day, but free WiFi to allow me to check in with people back home? I’m not going to complain. I can deal with some schmaltz and crazy characters.

Cafés with outdoor seating are scattered around the city centre. There seems to be a lot of independent places, non-chain, but it doesn’t always ensure quality service. I walked away from the prospect of a lazy afternoon coffee when after more than ten minutes I still hadn’t been served, despite  the café being pretty empty (I have since found out that it is in fact a self-service place! – but why then did the group who came in after me get served with a flourish almost immediately?). 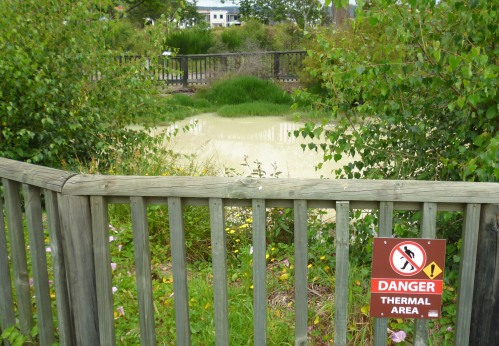 No entry to the hot pools, Kuirua Park, Raglan

Another afternoon I spent wandering the Kuirau Park, joining families and couples as they walked by steaming cauldrons of hot bubbling water and on to the cooler, bearable foot pools where people sat chatting and dipping their toes in the warm water. The surrounding air hung thick with the smell of sulphur and I tried to imagine actually being resident in this city. ‘I don’t notice it anymore’, said Susanne when I asked her about living with these constant fumes. For me, a newbie, it wasn’t so easy: there was the odd moment where I was distracted or forgot, but then a sudden waft would hit me and I would involuntarily scrunch up my face. I wonder what the effect is on people’s health? 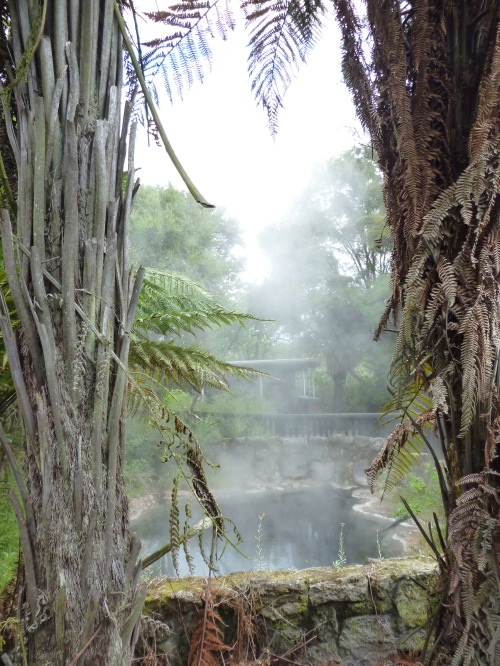 Hot springs in the Kuirua Park 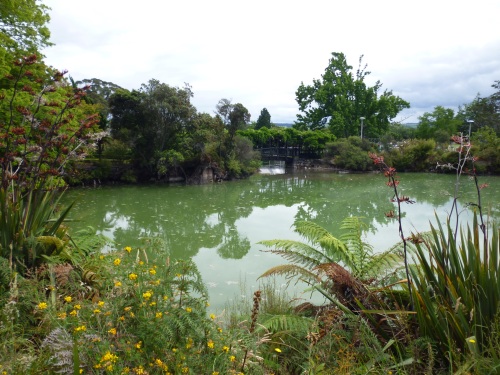 The park, on the whole, is much like other parks with benches and colour coordinated flower plantings and rich grassiness perfect for lounging in the shade of a tree. Birds hop around and ducks patter about on the little lake, and the air is filled with song: chirping, crowing and the harsh, raspy interruption of gulls. There is a background baseline hum of after work traffic, and drifting over from the other side of the park is the sound of a guitar and a man singing. A perfect day when the rain has taken rest and the sun forcefully kisses one with some of its vitamin D magic. 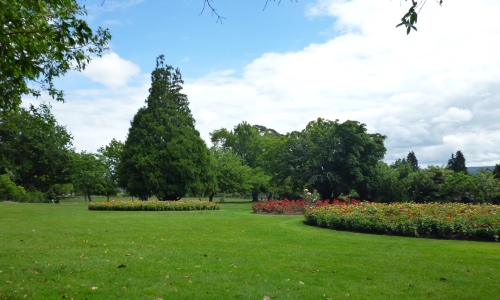 My time in Rotorua concluded with a trip down Eat Streat (yes, Eat Streat and not Eat Street) at the far end of Tutanekai Street where I ate a delicious Greek pizza in Café Ephesus with my CouchSurf host, chatted about life, love and travels and enjoyed a chilled bottle of white New Zealand wine. And for a moment, again, I forgot about the smell.

One response to “Can I stomach the stench of Rotorua?”