Taking a holiday in Arequipa

Most travellers go to Arequipa for the Colca Canyon Trek or the Santa Catalina convent. I did as many Peruvians do and went for a one week holiday. I wanted to hang out with a friend, to get over a bad belly and just relax.

My stay in Arequipa started badly with yet another tired hostel decision resulting in a damp, dingy room in an otherwise empty place. Situated in the desirable area of Yanahuara on a beautiful, tree lined road across from the bridge – Puente Grau – it had so much potential, but inside it was tired and in the midst of a load of building work (a disadvantage of travelling in low season is that hostels do their upgrades during this time so wires and cables and bricks lying around the place shouldn’t come as a surprise).

The next hostel, Bothy Hostel, was closer into town with clean dorm beds starting at S/.18 (£4.31). It was much more of a traditional hostel setup, one which I can imagine in high season is a crowded mass of travelling bodies and flirtation with its schedule of party activities and drink deals. In late November, however, it was nicely populated, enough to be social without the mess. And quiz night and all the other daily activities? Forget it. Nothing to be had in low season. But I truly didn’t mind spending lazy evenings swinging in a hammock on the roof terrace watching the sun set through the haze over the surrounding volcanos. It was more than enough to satisfy my lethargy. 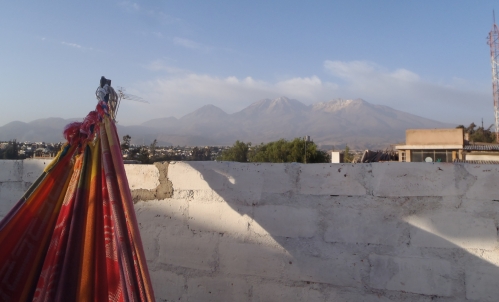 Arequipa, the ‘White City’, feels like a big place and it is: the second largest city in Peru (after Lima) with over 800,000 inhabitants. In terms of infrastructure, to my untrained eye, it appears to be somewhere between Lima and Cusco, obviously a city with big roads and high buildings and shopping malls but mixed with some appealing, cultural elements alongside a little bit of rough.

The central area is clean and appealing, two main roads – Santa Catalina and San Francisco – leading up off the main plaza, both streets with appealing architecture and visual pleasantness. Archways into houses spread out into cute little internal courtyards decorated with flowers and colourful paint jobs. These little pockets of prettiness are everywhere. Arequipa, it would seem, works on multi-levels of beauty; look beyond the obvious and it reveals itself to you. 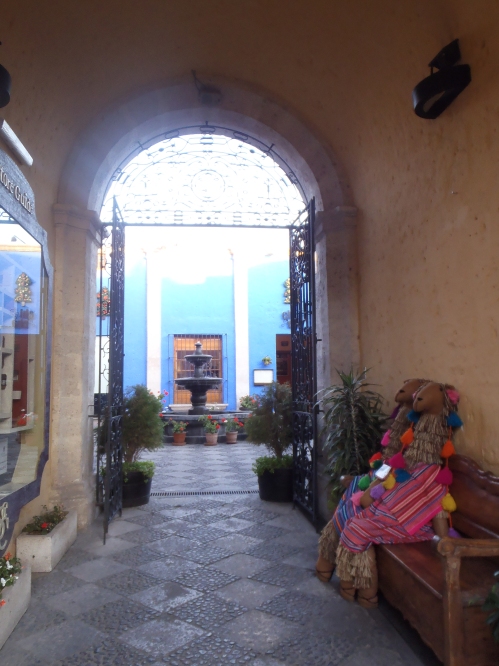 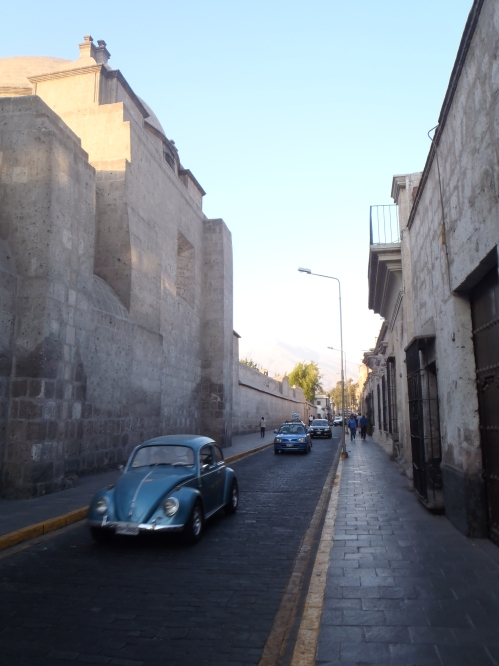 Up at the top of San Francisco street is the Plaza San Francisco, a small affair where people sit on the steps in the shadows of the Iglesia San Francisco, seemingly just lounging, little other purpose or rush. I did the same, kicking off my shoes and having a drink. A group of young guys walked by and pointed at my feet and wafted their faces, grinning cheekily. (I know I’m travelling but on the subject of hygiene, I’ve found keeping my clothes clean is not that big a deal in South America with plenty of opportunities to get laundry washed and dried for under £1 per kilo).

Plaza de Armas is the busiest of any plazas and parks that I’ve seen in Peru or Ecuador. Heaving with people of all ages at most points of the day, I wish you good luck trying to find a spare bench. Pigeons and people crowd the central area, businessmen take time to catch up on the day’s news whilst getting their shoes buffed and polished, and tourists and kids enjoy generous dollops of rich, tasty ice-cream from nearby Artika and Ice Palace. 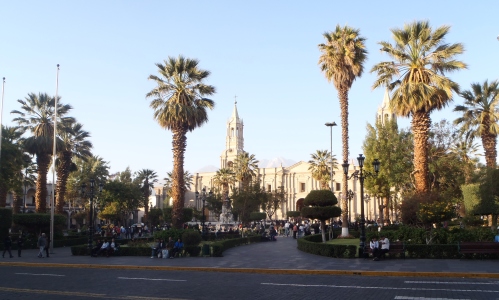 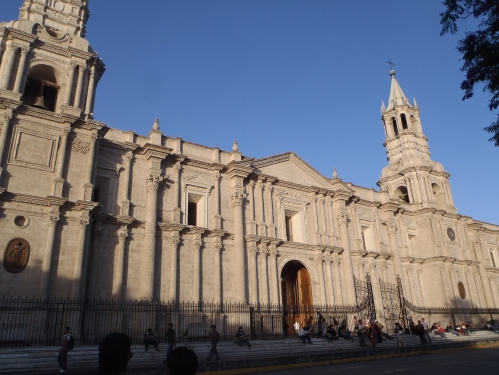 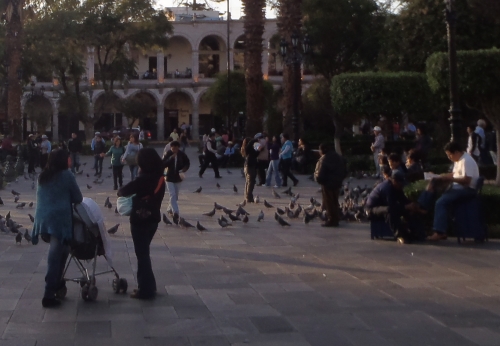 I walked south and east of the plaza, down Peru passed scores of little shops spilling out onto the street until I reached San Camillo and the local indoor market with sections for fresh juices and meats and household goods and more. Cats slept cuddled in sacks of pet food, traders scooped out ample servings of caramelised peanuts and police patrolled the perimeters of what is known as a prime spot for thieving. There was very little at the market in terms of artisanal goods, in short, this isn’t a tourists market (there are a few shops around Plaza del Armas and along San Francisco and Santa Catalina that offer the typical Peru t-shirts and llama chullos – woolly hats with ear flaps – and ponchos and postcards). 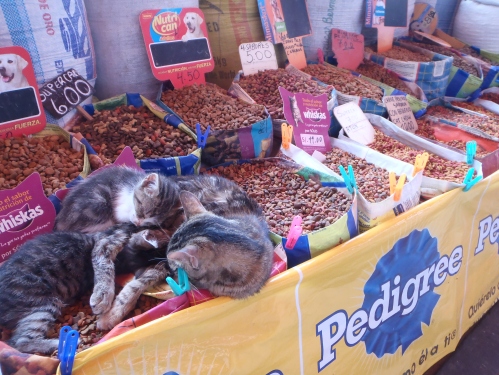 Cats having a cuddle and snooze 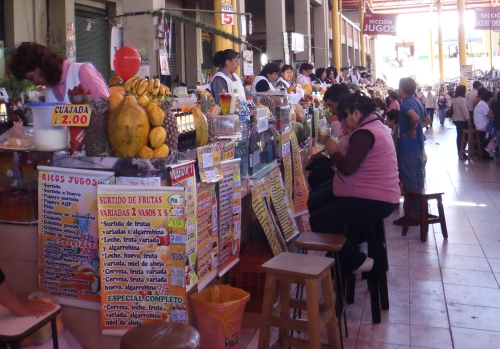 The start of the juice bars 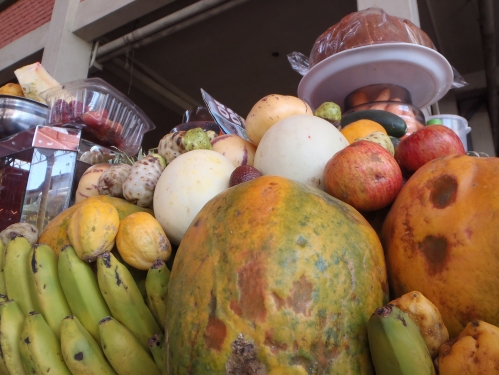 I discovered a penchant for pedestrianised streets and Arequipa centre boasts two lovely options for lazy strolls. Simon Bolivar runs from up by Puente Grau and right down until it merges with Sucre and reaches Iglesia La Merced. Benches and shops and eateries are scattered along the street but nothing is of significant interest. It is quiet, save for when the school children spill out of the colegio and attempt to practise their English on you. The second area dedicated to those on foot is Mercaderes off of San Francisco and Jerusalen. Much shorter and busier with posher shops and chocolatiers, it was the atmosphere that I enjoyed as people strolled arm in arm and window shopped.

So other than wandering around pretty streets and eating ice-cream and hanging in the parks and plazas and watching the world’s population of Beatles drive by, what else did this lazy holiday entail? I feel a bit of a backpacker travel cheat admitting it, but I also spent time roaming the malls up in Real Plaza and Saga Fallabella up in Yanahuara, and working my way through giant servings of popcorn whilst watching some truly terrible movies. Yes, this could be done in any large city in the world, it’s not a unique travel experience. The way people bought their tickets and watched the film was, well, as expected. Why wouldn’t it be?

It was a ‘break-from-travelling’ trip, a week of passively engaging with the high and low culture of the place,  and a chance to psyche myself up for the long journey back to Ecuador. Arequipa as a place to visit? Absolutely. In terms of activities? No idea.

4 responses to “Taking a holiday in Arequipa”