It’s 7:00AM in Lima, Peru and the city is getting ready for the We Run Lima 10km run sponsored by Nike. Stands are being set up and areas of the street cordoned off and sound systems tested.

At 9:00AM the horns blow and the music starts. A group of young guys are ready with their ‘junk’ band – metal bins and brooms – along Malécon de Reserva on the bridge by Parque del Amor. Onlookers join in, clapping, and the occasional runner breaks from treading tarmac to shake their hips to the beat.

I’m walking into the flow of runners (no, not being totally annoying, I’m out of their way). The sea of red t-shirts bobbing up and down makes one dizzy. There’s a real mix of age groups taking part although I can’t help but notice that the majority of runners are male. What’s that all about? 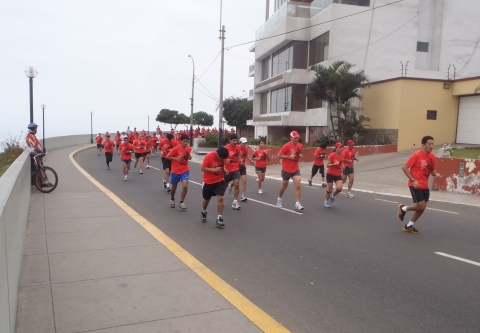 I duck out and sit in Parque del Amor. The huge stone statue of lovers entwined serves as a backdrop for couples photographs and the colourful mosaic seating outlining the park acts as a rest point for couples emulating the statue. The mosaic spells out messages of love, declarations of affection and positive messages: Viva la vida, Angela’ says one. Live the life.

Looking out to sea, the surf is coming in in perfect lines and peeling steadily to allow the clusters of surfers to catch rides. Most surfers stick to the Redondo breaks left of the pier, away from the beginners learning to surf at Makaha Surf Beach. They catch long left handers. The better, bigger waves are farther out; even the ones being surfed are a considerable paddle out, although it’s fairly relaxed, not too heavy on the inside.

Little parks and pedestianised walkways are dotted along the road that runs the stretch of the sea front. People of all ages rollerblade, skate or longboard along the pavements, peddle their bikes, wander along hand in hand or walk their dogs. It’s a lazy Sunday morning but these guys are in full swing despite the grey start. The sun tries to push through; it’s warming up.

The walk back into Miraflores up Malecon 28 de Julio takes you by the pristine tennis courts of Club Tennis Las Terrezas Miraflores, a place that smells of affluence. From the courts there are far reaching views out over the sea and for a moment I try to imagine myself living that life: weekend tennis with my friends followed by a coffee or cocktail (or is that too unhealthy for this place?). I shake the thought pretty quickly.

By the time I make it back to the central park of Miraflores, the early morning stillness has been replaced by the sound of vehicles and chatter, and the streets and the parks are heaving with people of all nationalities.

The Miraflores district of Lima feels wealthy and westernised, full of comfortable, homogenised places to eat, drink and shop. It feels nothing like the other parts of Peru that I have visited. On the one hand it is pleasant and familiar; on the other hand it’s horribly boring. I realise that this can’t be the full picture.

Show me more of yourself, Lima.

One response to “First impressions of Lima”