Doctor! Doctor! I think I swallowed a parasite

I debated whether to include this post, whether to blog about more private, gross moments of travelling. The Guardian’s advice on travel blogging is to ‘avoid tales of personal mishaps – missed buses, diarrhoea, rain – unless pertinent to the story’. I read it too late.  I have already written about my stomach grumbles on a couple of occasions. Why stop now? Realistically, not everything about travelling is to do with sunsets and social times; some parts are about being ill and weak and by yourself. This is real life, real travelling.

Roberto (yet another Roberto!), one of the guys running the show at Hostal Transilvania, Baños had said to me: ‘Go to the doctor. No drink beer. No good for stomach.’ He was concerned. ‘Tal vez proxima semana’, I told him. I could wait a week, I thought. Everyone gets tummy bugs. They pass.

I had another really rough night and was woken at 6:00 am by yet another marching band and startling fireworks. I felt weak and tired and bored of the gurgling and bloating and peeing out of my arse. I cancelled my morning meet-up and decided: it was time.

Roberto ordered a taxi and came with me to the doctors, a big, empty building with a wide view of the snowcapped Tungurahua volcano and friendly staff with a good grasp of English. Initial consultations over with nurse then doctor, I then had to…ahem… produce a sample to assess whether it was parasitical, bacterial or fungal. And, after days and days of explosive activity, it just wouldn’t happen. The irony. I gulped down water, walked around the bathroom, massaged my bloated belly, visualised. Nothing. I could hear the doctor and nurse and Roberto outside and I wanted to scream at my body ‘just work with me’.

Eventually, they were able to run some tests, and sure enough, I had picked up two loads of waterborne parasites (Quistes de Ameba histolitica and Quistes de Giardia Lamblia) and they were having a party in my gut. The doctor suggested I could have caught them when swimming in the jungle or from eating contaminated food. Unlucky. 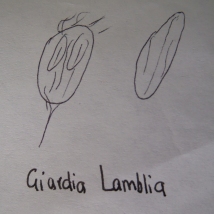 Loaded up with pills and prescriptions (and drawings of the ‘funny’ parasites, thank you nurse), I paid my $23 and taxied back. ‘Tomorrow you will start to feel better’, the doctor said. I couldn’t wait.

The medicine (Metronidazole 500g) made me seriously sleepy. My mouth peeled inside and to start with I felt nauseous. But it made me better. By day three I was starting to feel back on form. Adios giardiasis. Chao amebas.

2 responses to “Doctor! Doctor! I think I swallowed a parasite”